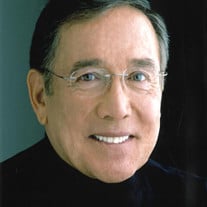 Andrew Lalo Gallegos (Andy), age 81, passed away in Salt Lake City on Monday, November 8, 2021 due to complications from cardiovascular disease and associated dementia. He was born on January 7, 1940 in La Jara, New Mexico to Elia Sandoval and Alphonso T. Gallegos. He was married to Joan Marian Marsh on December 8, 1984 in Midvale. They were happily married for 38 years, being strongly devoted to each other. In 1941, at a very young age, Andy moved to Salt Lake City with his family. He attended West High School and was the first Hispanic student body president. He was an excellent athlete and was a Golden Gloves Boxing Champion. He wrestled and played tennis for his high school. Andy graduated from the University of Utah with both a bachelors and a master’s degrees, with honors. He was a member of the Sigma Chi Fraternity. A Vietnam-era veteran, Andy was stationed at Fort Amadore in the Panama Canal Zone as an Intelligence Analyst. Andy was honorably discharged from the U.S. Army in 1965. He worked for United Airlines as a marketing manager, in Detroit, Cleveland, and San Francisco. When he returned to Salt Lake City, he became the executive director of the Salt Lake Community Action Program from 1973-1976. Andy always advocated for the poor and underserved minority communities. He proudly would tell stories of how his community “rabble-rousing” led to then President Richard Nixon threatening to impound the agency’s federal funding. He created the Institute of Human Resource Development, which is now known as Central de la Familia, one of the largest social services agencies in the state. He founded the Utah Hispanic Democratic Caucus and was a key organizer of the first Utah Chicano Conference in the 1970s. In the late 1970s, Governor Matheson asked Andy to work for his administration. He unified social services across the state, and co-authored a book entitled The Unification of Social Services: The Utah Experience (published by the University of Utah Press), which chronicled this work and his leadership. He later became the Executive Director of Social Services in 1981, being the first Hispanic cabinet member to serve in state government. He served as executive director until 1983. From 1980-1983, Andy was an adjunct professor at the University of Utah College of Social Work where he taught doctoral students. Andy then met his future wife,, they fell in love and were married on December 8, 1984 by a justice of the peace in Midvale. Later in 1989, they would have their marriage solemnized in the Catholic Church at St. Ambrose Parish. Andy founded Impact Business Consultants where he helped minority-owned businesses in loan-packaging, and developing business, financial, and marketing plans in partnership with the U.S. Small Business Administration. In 1985, he was awarded the Small Business Advocate Award by this organization for his notable achievements. In the late 1980s, Andy had his proudest accomplishments, becoming the father of two girls, Audrey and Sarah. He was a devoted father, and the girls’ fondest memory is having father-daughter dates at the Red Butte Café every Thursday, where they enjoyed posole soup and lively discussions. Andy instilled his love for social justice and politics in both daughters and was deeply proud of their accomplishments. From 1995 to his retirement in 2002, he served as the director of marketing and rideshare development for the Utah Transit Authority (UTA). Andy was very proud of submitting the winning name, TRAX, for the new light rail system, in a contest in 1999 held by Dan Jones and Associates and FJC&N Advertising. Andy and his wife, Joan, were subsequently awarded a free life-long pass to use the TRAX system. He received numerous awards for UTA television ads, and a national award for the best website in transportation, as he led UTA ridership to new levels. His active work history did not prevent him from enjoying many fun activities. Andy loved to ski with his family, and his favorite runs were at Snowbird. In the 1990s, Andy and his family were involved in the reintroduction of wolves to Yellowstone National Park. He loved to travel, and he had two dream vacations in the Amazon Rainforest and France. His hobbies were golf, gardening, and he built a hiking trail behind his house in Emigration Canyon. His community service was life-long and extensive. Not afraid of controversy, his strong leadership skills led him to accept the challenge of chairing the South High School Closure Committee, along with being a member of the Salt Lake School District Boundary Committee. In 1982, he was a member of the U.S. State Department Delegation to the Southeast Asia Refugee Resettlement in Manilla, Philippines, where Andy assisted in designing national refugee programs for the Vietnamese. As board chair of Utah Catholic Community Services, Andy led the building of the St. Vincent’s de Paul Soup Kitchen, and the Bishop Weigand Day Center for the Homeless. In 2018, he received the Utah Coalition of La Raza Lifetime Achievement award for his years of leadership, public service, and advocacy in the Latino community. Andy is survived by his wife (Joan), daughters Audrey and Sarah (Anton), brothers Alphonso, Dick, and sister Gloria Peters (Bill), and his beloved pet dogs Flounder, Bing, and Frankie. He is preceded in death by his parents, Elia and Alphonso T., and brothers Epifanio, Arthur, Joe Fred, Efren, and sister Josephine. A celebration of his life will be held on Saturday, November 20, 2021 at the University of Utah Red Butte Gardens Orangerie, beginning at 10am with light refreshments. At 10:30am, memories from family members and close friends will be shared, along with a short movie of Andy’s life. Then, a Southwestern-themed brunch will be served. For those not able to attend in-person, the memorial service will be live-streamed. Please contact Sarah Gallegos Bielecka at [email protected] to receive a link. In lieu of flowers, donations to Defenders of Wildlife or Catholic Community Services of Utah would be most appreciated. Please come to the celebration of life event to honor this home-grown trailblazer’s life!

Andrew Lalo Gallegos (Andy), age 81, passed away in Salt Lake City on Monday, November 8, 2021 due to complications from cardiovascular disease and associated dementia. He was born on January 7, 1940 in La Jara, New Mexico to Elia Sandoval and... View Obituary & Service Information

The family of Andrew (Andy) Lalo Gallegos created this Life Tributes page to make it easy to share your memories.

Send flowers to the Gallegos family.