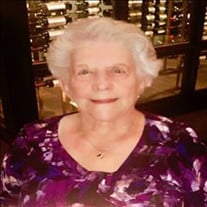 Ariella Ida Moretti-Barrutia, mother, great-grandmother, wife, aunt, and beloved friend to so many passed away on Tuesday, December 14, 2021 at the age of 93. Born in the small mountain town Highland Boy, in Bingham Canyon, Utah on January 21, 1928, Ariella was the first child and only daughter of Carlotta and Umberto Moretti, both immigrants from Northern Italy. Ariella grew up surrounded by her Italian family, including two younger brothers, Dino and Berto Moretti, and dozens of other immigrants primarily from the European continent. Those families became a major support network for the Moretti family that owned a boarding house for miners working in the large, open pit Kennecott Copper Mine. Conditions in Highland Boy were extremely harsh, from severe winters to the daily work required to house, feed and board dozens of workers. In this environment, and even as a small child, Ariella learned the skills of cooking, socializing, and entertaining which she carried with her to her final days. To be invited to the Moretti house was to be assured a warm and fun experience and certainly a delicious meal. It was in Highland Boy that the Moretti's ended up forging a life-long destiny with the Barrutia family, who also owned boarding houses and bars in Highland Boy and Park City. Ariella became childhood friends with the Barrutia children Anthony (Tony), Albert (Al), Richard (Dick), and Elvira (Beeda), but it wasn't until almost twenty years later, after the Barrutias moved their business to Salt Lake City that she ran into a grown-up, handsome Tony on the street and the two rekindled their friendship in a whole new way. Tony always said it was Ariella's apple pie that made him fall in love, and on October 23, 1948 the two married. Companions for 56 years until his death in 2004, they raised six children, tirelessly working hard to provide for them, but never forgetting to build solid friendships and help many others along the way. Family and friends were everything to Ariella. Yet, born with a dynamic and larger than life personality, the literal energy of a machine, and the creativity of an artist, she somehow found time for a career -- and hobbies. As a young woman she worked as a professional seamstress, and she went on to a decades-long career with The JC Penney Company as a department store display artist. Ariella would often put in a full day of work, go home to cook for her large family, and then spend evenings with close friends on one of her passions: ceramics and crafting. Her Dresden clay lace dolls and molded ceramics were a great source of pride and gift giving. Whatever Ariella did, it was done with incredible gusto. Her baking skills were comparable to a professional, and she took delight in gifting many of her delicious creations from Italian delicacies to German apple strudel. Martha Stewart could not hold a candle to Ariella. Queen of every party, she was constantly planning large family gatherings for each birthday, holiday, and "just because." Her all-day events in the Utah canyons, hauling a full day's worth of meals for family and friends were notorious, and Tony was always her faithful companion and worker bee. Often called "the General," Ariella rallied the troops! Loving friend, Florence Halliday, and others, would lend special talents and support for countless gatherings that will never be forgotten. Her Italian heritage was a profound source of pride Ariella's entire life. A member of the Italian-American Civic League of Utah for over fifty years, she served as president of the league in 1986. She was also, along with Tony, a member of The Basque Club of Utah and donated thousands of hours to their events and fundraisers. Ariella Moretti-Barrutia lived a life worth living. Not motivated by wealth and profit, she instead used her amazing and infinite skills primarily for pure joy and generosity, and she taught many people both practical and spiritual lessons. Mark Twain once said: "To get the full value of joy you must have someone to divide it with." Ariella had limitless "someones," as she was loved and admired by everyone who entered her energetic, passionate, opinionated orbit, often topped with a swear word or two. A deep heartfelt thank you to family and friends who so lovingly cared for "Grandma Ari" in these last difficult years and months: Aerial Turner, Austin Netelbeek, Diane Barrutia-Netelbeek, Dana Barrutia, and in Ariella's own words: "the best son-in-law a mother could have asked for," Peter Netelbeek. Ariella is survived by sons Val (Margi), Paul; daughters Dana, Diane (Peter), Nanette; sisters-in-law Joy Moretti, Merilyn Barrutia, and Kathleen Barrutia; grandchildren Andre, Seve, Austin, Brayden, Alexander, and Madeleine; many special nieces, nephews, and so many friends. Preceded in death by her daughter Carla; mother; father; brothers Dino (wife Shirley), Berto, and in-laws Al, Richard, Elvira Barrutia. Bruce White (son-in-law). The party is now on the other side! Family and friends are invited to attend a service for Ariella on Tuesday, December 28, 2021 at Neil O'Donnell Funeral Home at 372 East 100 South, Salt Lake City, Utah 84111. Family visitation at 11:00 AM followed by a service at noon and interment at Mt. Olivet Cemetery, 1342 East 500 South, Salt Lake City, Utah 84102. Ariella will be interred with her husband Tony and daughter Carla in Salt Lake City, Utah. **Masks required. In lieu of flowers the family requests donations to: Chef Jose Andres' World Central Kitchen Organization, www.wck.org . Or, Volunteers of America Utah. www.voaut.org For those who would like to watch the Live Stream Video Broadcast please select the Videos Tab in this On-Line Obituary. The Live Stream will be available at the beginning of Services or any time following.

Ariella Ida Moretti-Barrutia, mother, great-grandmother, wife, aunt, and beloved friend to so many passed away on Tuesday, December 14, 2021 at the age of 93. Born in the small mountain town Highland Boy, in Bingham Canyon, Utah on January... View Obituary & Service Information

The family of Ariella Ida Barrutia created this Life Tributes page to make it easy to share your memories.

Send flowers to the Barrutia family.