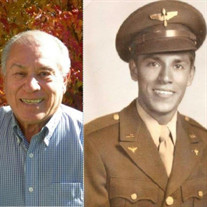 Augustine (Augie) Cervantes, beloved husband, father and grandfather, passed away on November 26, 2021. He passed peacefully surrounded by his loved ones. Augie was born on May 15, 1925 in Los Angeles, California, to Carmen (Prieto) Cervantes and Pedro Cervantes. Augie married Bertha Bencomo on June 10, 1950 at St. Anthony’s Church in Los Angeles, California. God blessed them with 71 years of a happy marriage, full of love. Augie served in the U.S. Army Air Corps. Though this was during World War II, he was based in the U.S. and never saw action. He longed to be a pilot, however, and after his honorable discharge, he took up flying light aircraft and earned his pilot’s license. Later, he began a successful career with Los Angeles County Purchasing and Stores Division, starting as a stock boy and ending as Deputy Purchasing Agent. Dad had a keen mind and a talent for building and repairing. He could read an instruction book and masterfully complete a difficult project. And his projects expanded as his family grew. Dad had many virtues, among them, discipline, diligence, loyalty, the will to labor and sacrifice for his family, love for God, country and family, and his deep devotion to his darling Bertha, whose own virtue and love brought him much happiness. He was very interested in politics and history, and could tell with pinpoint accuracy of critical facts, citing dates, causes and consequences. He was a patriot, grateful for the freedoms and all that is good in America, but also, he saw what would lead to the loss of freedom and human rights, and he was critical of moves or philosophies that would take America down that path. He believed in getting the word out, to help others learn as he learned of the importance of critical thinking and of understanding the founding principles of America, to keep America safe, sound and blessed. Dad loved to sing, and he loved car trips and the two often combined for family vacations. Dad gave the example of a faithful man who regularly attend the Holy Sacrifice of the Mass and many devotions, his favorite being the Novenas to Our Mother of Perpetual Help. Both Mom and Dad supported many charities. And they made many sacrifices to educate their daughters in the Holy Faith. The Holy Rosary was regularly recited by the family through many years. Augie is survived by his three daughters and sons-in-law, Elena Cervantes, Irene and Uwe Hacke, Therese and Peter Kulda, by his wonderful grandchildren, Stephen, Paul, James and Maureen Kulda, by his sisters-in-law, Lily Valdes and Tillie Bencomo, and many nephews and nieces. He is preceded in death by his beloved wife, Bertha, his sister, Juanita Cervantes, his parents, Carmen and Pedro Cervantes, and sisters/brothers-in-law, Mary and Manuel Esparza, Ernesto and Estella (Esparza) Bencomo, Dolores and Gustavo Esparza, John and Bertha (Robledo) Bencomo, Robert Bencomo, and Carlos Valdes. The Holy Rosary followed by a time of visitation will start at 6:30 pm on Friday, December 10, at Neil O’Donnell Funeral Home, 372 East 100 South, in Salt Lake City. The Holy Sacrifice of the Mass will be offered with funeral at 11:00 am on Saturday, December 11, at St. John the Baptist Church, 300 Kimballs Lane (300 East 11800 South), in Draper. Interment will take place at Larkin Sunset Gardens, 1950 East 106 Street South, in Sandy, under the care of Neil O’Donnell Funeral Home. A reception will follow in the church hall at St. John the Baptist Church. The family thanks the nurses, physical therapists, nurse practitioners, physicians’ assistants and various staff who provided compassionate, respectful advice, guidance and services in Augie’s last months, including Taelyr, Clay, Julia and Cody from Envision Home Health, Michelle, Pam, Janessa, John and Joan from Community Nursing Services, and Hannah and Sandra from Utah Mobile Physicians.

Augustine (Augie) Cervantes, beloved husband, father and grandfather, passed away on November 26, 2021. He passed peacefully surrounded by his loved ones. Augie was born on May 15, 1925 in Los Angeles, California, to Carmen (Prieto) Cervantes... View Obituary & Service Information

The family of Augustine "Augie" Cervantes created this Life Tributes page to make it easy to share your memories.

Send flowers to the Cervantes family.