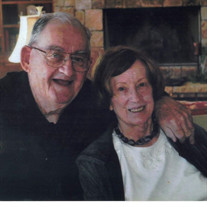 Barbara Sophia McGurk, age 97, passed away on December 16, 2021 at Saint Joseph’s Villa. She was born on June 16, 1924 in Salt Lake City to Ramona Wall and Floyd Smith. Barbara married John McGurk on July 25, 1945, he preceded her in death in 2011. After her birth she moved to California, Salt Lake City and Castle Dale before the family settled in Payson, Utah. She completed high school in Payson where she played First Chair Violin. After graduation she moved to Salt Lake City and attended business college. She worked for the Overseas Replacement Depot in Kearns during World War II. She met her husband John who was in the Quartermaster Corps there. They married in Sacramento, California and upon return to Utah she continued to work for the Kearns Air Base. After the war she held various jobs as both a secretary and an accountant. Her life took a different turn when her good friend and neighbor, Carol Sumpsion, introduced her to the world of antiques. She opened her first shop in 1978 and kept collecting and selling over the next twenty five years. After moving to Independent Living she met fellow musicians, especially her friend Jim Faigre, and started to play piano and violin again. She truly enjoyed being part of the concerts held most weekends there. As a group they called themselves the “Villa Gorillas” or “Geriatric Zepplin”. Following a stroke she lost her ability to play as much but still loved to listen and hear the others play. She enjoyed going to lunch with her sisters, clothes shopping with her daughters Pat and Terry and many family gatherings. When her sons John and Mike (who are musicians) could visit she had them play for everyone which brought her great joy. She is survived by her children, Patricia McGurk; Terry (Mike) McKone, both of Salt Lake City; John (Sharon) McGurk of Clearwater, Florida, and Mike (Daina) McGurk of Austin, Texas; Sisters, Lorraine Braithwaite and Connie (Stan) Cloward; Six Grandchildren; Eleven Great-Grandchildren and One Great-Great-Grandchild as well as many nieces, nephews and extended family members. She was preceded in death by her husband, John, and her sister, Gloria Barnett. A Mass will be Celebrated at Saint Joseph Villa for residents and family. Interment and a Celebration of Life will follow in June at a date to be determined. The family would like to extend their thanks to all the people that helped Barbara along the way, including the Independent Living and Assisted Living Villa Staff, who took such loving care of her these last few years. Barbara had a good life and passed away peacefully with her grandson, Nick, playing music and talking to her. Thank you to Canyon Hospice Care Team for their care and support.

Send flowers to the McGurk family.