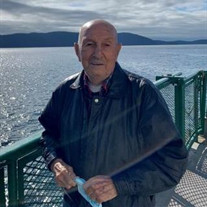 High mountain timber, a fast running stream, and an afternoon spent on his horse was pretty close to paradise for our dad. Born December 20, 1926 and living independently until the last month of his life, Benjamin Ernest Archuleta lived for... View Obituary & Service Information

The family of Benjamin Ernest Archuleta created this Life Tributes page to make it easy to share your memories.

High mountain timber, a fast running stream, and an afternoon...

Send flowers to the Archuleta family.