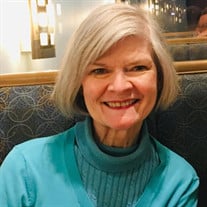 On August 19, 2021, Brenda Wesner, our beloved sister, aunt, and friend, passed away in Salt Lake City, Utah after a courageous battle with Cerebral Amyloid Angiopathy. Brenda was born on December 7, 1943, to Howard and Adaline (Jones) Wesner... View Obituary & Service Information

The family of Brenda Wesner created this Life Tributes page to make it easy to share your memories.

Send flowers to the Wesner family.