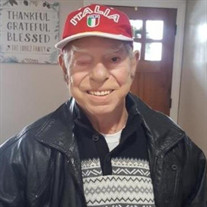 Our beloved husband, father, grandfather, brother, and uncle. Carmelo Casella, 83, of Salt Lake City, died 11/19/2019 in St. George, UT of Alzheimer’s. Born 01/16/1936 in Aquedolci, Messina, Italy to Antonio and Maria Casella Carmelo went to school in Italy and served in the Italian army when he was 18. He was a truck driver after. Met and married Caterina Ventimiglia in Milano, Italy. They moved to Pennsylvania in 1971 and moved to Utah in 1991, Carmelo worked at Smith’s pies when he first came to the United States. Eventually he opened two grocery stores, after a while turning one of them into a laundromat. As well as he owned some rental properties. Carmelo loved to garden every summer and always had lots of vegetables. He also loved to build things with his hands or fix things around the house. When he moved to Utah he helped Caterina in her alteration shop. He loved his grandchildren above all. You are going to be greatly missed Nonno. Carmelo is survived by his wife, two sons, two daughters, their spouses, grandchildren, great grandchild, three sisters and several nieces and nephews, Carmelo is preceded in death by his parents, brother, two sisters, and one grandchild. A funeral mass will be celebrated 11:00 a.m. Saturday, December 14, 2019 at St. John the Baptist Catholic Church, 11800 South 300 East, Draper, UT.

The family of Carmelo Casella created this Life Tributes page to make it easy to share your memories.

Send flowers to the Casella family.