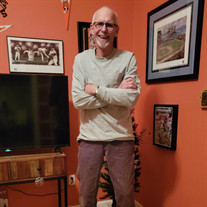 David Lynn Varley passed away unexpectedly on December 18, 2021, in Salt Lake City, Utah. He was 66 years old. Dave was born to Clifford William Varley and Anne Dorothy Lether Varley on September 29, 1955, and grew up in the Rose Park area of Salt Lake City. Dave attended West High School, but left to enlist into the United States Coast Guard in May, 1973, where he served two years, achieving rank of Petty Officer Third Class aboard the USCGC Midgett, ported at Coast Guard District San Francisco, CA. He left the Coast Guard in 1975, and lived in California traveling about on his Harley, enjoying life. Dave made his way back to Utah in 1977 where he met and later married Ann Dru Vega at St. Patrick’s Catholic Church. They had two children together. Dave made his living as a plumber, first apprenticing and then completing license as a journeyman plumber at Rocky Mountain Mechanical here in Salt Lake City. After moving his family to California in 1987, Dave was initiated into the U.A. Plumbers & Steamfitters, Local 343 in Fairfield, California, through which he completed 33 years as a Building Trades Journeyman Plumber ending his career where it started, at North Bay Plumbing, Inc., in Fairfield. He had just retired on November 30, 2021, and was looking forward enjoying home life with Ann, even bigger stained glass projects, following San Francisco Giants baseball, 49ers Football and most of all, the Utes and Pac 12. Dave is survived by his wife, Ann, daughter, Elisabeth Lyn and son, Joseph Andrew, of Stockton, California, his sister Dorothy Hoffman of Pahoa, Hawaii, and brother William of Salt Lake City, Utah. Dave was Uncle to many nieces and nephews on both sides of his family and loved each one of them, regardless of distance or time. To his extended family of in-laws, in-law never applied. Dave was simply brother and son. It is also important to mark the good friends Dave had in his life. His “brothers and sisters” who share a bond beyond family ties. They are Dee and Kathy Giles of Hanna, Utah; Butch and Cynthia Schmidt of St. George, Utah; Dave and Marilyn Schmidt, also of St. George Utah; Dennis and Kathy Watt of Salt Lake City and Dave and Debbie Walker of Salt Lake City. When you grow up together and grow old with friends like these, you know your life has been well spent. Dave’s certainly was and he lives on in each of them. A rosary was said at the chapel of Neil O’Donnell funeral home in Salt Lake City on the evening of December 22, 2021. A funeral mass will be said in the summer of 2022, and he will be interred at the Veterans Memorial cemetery at Camp Williams in Bluffdale, Utah, the date for which will be announced later. In lieu of memorial or flowers, please consider supporting the American Lung Association, COPD Treatment Research, or the US Forestry Service in his name

David Lynn Varley passed away unexpectedly on December 18, 2021, in Salt Lake City, Utah. He was 66 years old. Dave was born to Clifford William Varley and Anne Dorothy Lether Varley on September 29, 1955, and grew up in the Rose Park area of... View Obituary & Service Information

The family of David L. Varley created this Life Tributes page to make it easy to share your memories.

Send flowers to the Varley family.