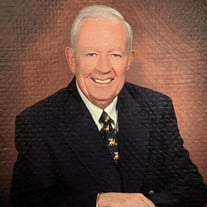 Donald George Lochhead, 88, of Bountiful, Utah, died on May 2, 2021, peacefully at home surrounded by his family. He was born on July 14th, 1932 in Billings, Montana to Victor and Inez Lochhead. His family moved to Ogden, Utah, where he grew up and graduated from Ogden High (Go Tigers!) He earned his bachelor’s and master’s degree from Utah State University (Go Aggies!) and a doctorate from the University of Utah (Go Utes!) He married Louise Keiser November 22, 1964, at Saint Ambrose Catholic Church. They were inseparable. He loved her every day of their 56 year marriage. Anyone that knew them knew that he absolutely adored her and she him. They had three children, Lara, Donna and Mark. The most important role of his life was as a husband and father. He was amazing as both of those things and left no doubt that Louise and his kids were his first priority in everything that he did. In 38 years of service for the Davis School District, he taught English at Davis High School where he also was a counselor, and served as a district supervisor of English and Foreign Language Arts. For over 50 years he was a faithful member of St. Olaf’s Parish in Bountiful, Utah. In the parish he served in a variety of roles including Lector, Eucharistic Minister, and Minister to the Sick. His other lifelong love was tennis, and he enjoyed both playing and watching including trips to Wimbledon, the US Open, and Indian Wells. He won several tournaments in Salt Lake and Davis County and played every week for fun, well into retirement. His lifelong love of Notre Dame started by listening to the football games (Go Irish!) on the wireless with his grandfather, and that love never waned. He followed the Aggies and was a longtime season ticket holder for University of Utah football and basketball. He loved the tailgating. He loved the arts. He was a season ticket holder at Pioneer Theater for over 50 years and often enjoyed opera and symphony. He loved movies, from his Saturday morning cartoons at the Egyptian theater in Ogden, through the golden era of cinema. He had a wonderful memory for movie lines, and always had the perfect line for any situation. His favorite movies were Casablanca and Lawrence of Arabia, which inspired him to apply and work for the USIA in Tripoli, Lybia, North Africa. He loved that experience and referenced it often. He loved to travel, and made it to places like England, Scotland (the Brave!) France, Italy, Germany, Spain, Poland, Austria, Canada, Mexico, Russia, Japan, Hong Kong and even had a Singapore Sling at the Raffles Hotel. He was curious about the world (he loved the Argentine tango and its music!) and was a huge Anglophile. He loved everything British from Jaguars to Winston Churchill. One of the things he admired about Churchill was his wit, and he had that in abundance. He was quick witted and had a very dry sense of humor. His comments were always wryly amusing. He was a father figure to many of his nieces and nephews and relished the role of Uncle Don. He was beloved and will be dearly missed. “Here’s looking at you, kid.” He is survived by his wife Louise Lochhead, his children Lara, Donna, and Mark, and his brother Richard. He is preceded in death by his parents Victor and Inez Lochhead and his brother Jack. Many thanks to Dr. Hanlon for her years of care and to our many dear friends and neighbors who all loved Don and who have been so supportive and amazing throughout his life and at this time of loss. Please have a cocktail with someone you love in his honor. It’s always five o’clock somewhere. There will be a vigil /prayer service from 6:00 to 6:30 pm followed by a viewing from 6:30 to 8:00 pm on Tuesday, May 11th at Neil O’Donnell Funeral Home, 372 E. 100 S. Salt Lake City, Utah 84111. Masks and social distancing required. The funeral mass is on Wednesday, May 12th at 11:00 am after a viewing from 10:00-11:00 am at Saint Olaf Catholic Church, 277 E 1800 South, Bountiful, Utah, 84010 followed by a reception. Masks and social distancing required. The funeral mass will be live streamed via: https://www.facebook.com/pages/St%20Olaf%20Catholic%20Church/113893411974445 Interment at Mount Calvary Catholic Cemetery, 275 U Street, Salt Lake City, Utah, 84103 following reception.

Donald George Lochhead, 88, of Bountiful, Utah, died on May 2, 2021, peacefully at home surrounded by his family. He was born on July 14th, 1932 in Billings, Montana to Victor and Inez Lochhead. His family moved to Ogden, Utah, where he grew... View Obituary & Service Information

The family of Donald G Lochhead created this Life Tributes page to make it easy to share your memories.

Send flowers to the Lochhead family.