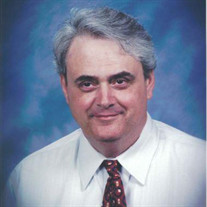 Our beloved son and brother, Donald Earl McGowen, was born to Grant F. McGowen and Margorie Seely McGowen on July 2, 1946 and died on November 6, 2021. Don led a quiet life. He lived with his parents until the age of 17, with his mother to the age of 40, and then with his sister to the age of 74. His last nine months were spent at St. Joseph's Villa. Don's greatest passion in life was all things cars and trucks, especially Kenworth dump trucks. He loved "talking trucks" to anyone and everyone. He was quiet knowledgeable about his favorite subject. In his early years he put together models of cars, trucks, boats, and planes. (It seemed like thousands) He was able to simply look at a diagram of a model and he knew precisely how to put it together. He cut grass from age 11 to 65 or so. He worked with Jordan Valley Work Supported Employment for seventeen years, many of which were in maintenance at Skaggs Hall. Don had a marvelous sense of humor, he was quite witty and his laugh was rambunctious and very infectious. We always knew where Don was because his movements were infused with great energy. He always enjoyed a slice of pumpkin pie. He would never leave the house without a hat regardless of his other sartorial choices. He loved to watch Miss Fischer's Mysteries, Father Brown, Magnum P. I. (the Original), Perry Mason, the first King Kong, the Thing with James Arness, Gone With The Wind, and The Sound of Music. He watched Ryan's Reef many, many times and his favorite actor was John Wayne. His Catholic faith was very important to him. He is preceded in death by his Father and Mother and his many cherished pets. To just name a few, (Mom was a great sport) Jake, Tanya, Poochie, Cindy, Mike, Muffy, Maggie, Spencer, Mohawk, Jinks, and Mickey. We wish to thank the many who helped Don with his struggles in life. The sisters of Charity at Kearns St. Ann's School, Jordan Valley Work Supported Employment, LeeAnn his social worker, Dr. Springer, Dr. Barry Stultz, the nurses at St. Mark's Hospital and the long suffering staff at St Joseph's Villa. He is survived by his sister Mary Louise McGowen, loving cousins and many friends. He will be greatly missed. The viewing will be November 10, 2021 from 11:30 am to 12:30 pm and a graveside service at Mount Calvary Cemetery at 1:00 pm. Following burial proceedings, family and friends may meet at Chuck-a-Rama Buffet on 744 East 400 South.

Our beloved son and brother, Donald Earl McGowen, was born to Grant F. McGowen and Margorie Seely McGowen on July 2, 1946 and died on November 6, 2021. Don led a quiet life. He lived with his parents until the age of 17, with his mother to... View Obituary & Service Information

The family of Donald Earl McGowen created this Life Tributes page to make it easy to share your memories.

Our beloved son and brother, Donald Earl McGowen, was born to...

Send flowers to the McGowen family.