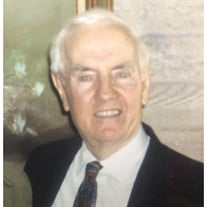 1939 - 2019\r\n\r\nHeaven gained another angel, and the possibility of another Irish saint, as our beloved husband, father and grandfather, Edward Dalton Brophy, passed away on June 22, 2019. Edward died peacefully at home surrounded by his loving and devoted family.\r\nEdward was born and raised in Queens, New York and participated in and was the leader of innumerable and memorable hijinx and shenanigans with his six siblings. Edward took his elementary and high school Catholic education to heart, developing a lifelong commitment to public service, devotion to family, and an affinity for uniforms. Edward earned a bachelors degree from St. Francis College and a Masters Degree Summa cum laude from NYIT.\r\nEdward always looked dashing in his NYPD uniform where he served for 12 years before transferring to the New York State Supreme Court in the nascent days of the agency. Through hard work, honesty and an excessive amount of likability, Edward retired as Chief Court Officer in charge of jury transportation. Edward's professional accomplishments were many and varied, VP of a union, president of the Emerald Society and National Law Enforcement Associates, an elected community leader and in his spare time achieved the rank of Commander in the United States Coast Guard Reserves.\r\nIn 1976, Edward married the love of his life and best friend, Eileen. They started and raised their family in Staten Island, New York and ever true to their values, left it better than they found it. Inspired by their son, John Paul, they founded with six other families, the Seton Foundation for Learning, a parochial school for developmentally delayed, still educating children K-12 today.In 1995, Ed and Eileen headed west and decided to take early retirement in Bountiful, Utah. The adventure continued in Utah and saw Edward as a coach for Special Olympics, a seasoned traveler, an active parishioner of St. Olaf's, an avid Gonzaga basketball fan and all around legend of a guy.\r\nIf you were lucky enough to know him, you were lucky enough.\r\nEdward is survived by his beloved wife Eileen, his children Noreen, Catherine, Edward, Kevin, Sofia (Joseph Chisholm) John Paul and Alana (Grant Potter) grandchildren Sean, Patrick, Amanda, Ryan, Evan, Aislynn and Desmond. His sisters Patricia Scott and Sheila McCullagh, brother Maurice and numerous nieces and nephews.\r\nEdward was preceded in death by his parents, Edward and Winifred Brophy, his sisters Lorraine Nolan, Eileen Lorenz and brother, Thomas Brophy.\r\nOur family would like to extend heartfelt thanks and appreciation to Danny Lurrita, Jenny Urry and Becca Brough of Summit Health Care and Hospice.\r\nA funeral mass will be celebrated Saturday, June 29, 2019 at 10:00 a.m. at Saint Olaf Catholic Church, 1800 South Orchard Drive, Bountiful, where friends may call one hour prior. A vigil service will be held Friday, June 28, 2019 at 7:00 p.m. at Neil O'Donnell and Sons Mortuary, 372 East 100 South, SLC, where friends may call from 5:00 p.m. - 7:00 p.m.

1939 - 2019\r\n\r\nHeaven gained another angel, and the possibility of another Irish saint, as our beloved husband, father and grandfather, Edward Dalton Brophy, passed away on June 22, 2019. Edward died peacefully at home surrounded by his... View Obituary & Service Information

The family of Edward Dalton Brophy created this Life Tributes page to make it easy to share your memories.

Send flowers to the Brophy family.