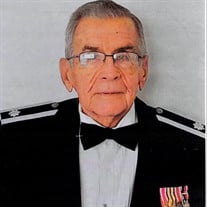 Edward Roy Larrabee, 89 years young of Bountiful, Utah, passed away on September 21, 2020. Edward was born on October 13, 1930 in Fulton, NY to Henry Robert Larrabee and Edna Maude Roy Larrabee. Edward (Ed) was the youngest of four children, he had 2 brothers and 1 sister. He was a graduate of Fulton High School in 1948. Ed joined the Air Force in 1949 launching a 24- year Air Force career. From 1949 to 1954 he served as an enlisted service member. Ed married Marilyn Ruth Dennett of Auburn, NY on February 5, 1955 in Holy Family Church, Auburn, NY. Shortly thereafter, he attended Officer Candidate School in San Antonio, Texas. Ed and Marilyn embarked on an adventuresome military life which included being stationed in New York, Alabama, Texas, West Germany, New Mexico, Ohio, Wyoming, and Texas again. Ed graduated from the University of Wyoming in 1967 with a degree in statistics just before being assigned to serve in the Vietnam War in Nha Trang during the Tet Offensive. Ed retired from the Air Force as a Lt. Colonel in 1973. Ed and Marilyn had 10 children and after his retirement from the Air Force, settled in Bountiful, Utah. Ed then worked for U&I Sugar and Sperry (Univac) until he fully retired in 1993. Ed was an adventurer and loved the outdoors. He enjoyed spending time with his family camping and skiing. He also enjoyed stamp collecting, genealogy, photography, gardening, traveling, and snorkeling – he and Marilyn made 28 trips to Hawaii! Ed also went on eight pilgrimages to Europe, the Middle East, Japan, the Philippines, Russia, and Mexico; frequently accompanied by his wife Marilyn. As a devout Catholic, he gave generously to charitable organizations in support of the church's work throughout the world. Ed is survived by 9 of his children; Steven Edward Larrabee (Mary), Michael David Larrabee (Julia), Mary Ruth Larrabee, Roxanne Christine Larrabee Kammerer, Bruce William Larrabee (Patti), Timothy Joseph Larrabee (Angela), Paul Andrew Larrabee, Daniel Scott Larrabee (Angelique), Sarah Ann Larrabee Davis (Christopher). Ed was preceded in death by his incredible and beloved wife of 64 years, Marilyn Ruth Dennett Larrabee and his magnanimous son Matthew Roy Larrabee (Kris). Ed is also survived by 23 grandchildren and 15 great grandchildren. Ed was a devoted husband and father, dedicated Catholic and service member, with a strong sense of duty and dry sense of humor. He will be missed dearly by his family. He will join Marilyn and Matt and will continue to help us all through the memory of his example of devotion and dedication. Holy Rosary will be recited Monday, September 28th at 9:45 a.m. at Saint Olaf Catholic Church, 1800 South Orchard Drive, Bountiful, followed by a viewing from 10:00 – 11:00 a.m. and the celebration of the funeral mass at 11:00 a.m. Committal with military honors to follow at Mt. Calvary Catholic Cemetery, 4th Avenue and T Street. After the burial, the family will host a repast in honor of Ed at the family home in Bountiful. In lieu of flowers, please make a donation to Cross Catholic Outreach.

The family of Edward Roy Larrabee created this Life Tributes page to make it easy to share your memories.

Send flowers to the Larrabee family.