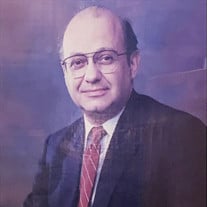 Manny, age 84, went “upstairs” to be with the love of his life, Annette (Nan) Hansen Floor, Monday, October 12, 2020, at his home in Salt Lake City, Utah. He was born on December 3, 1935 to Marie A. (Trakas) and Andrew William Floor in Salt Lake City, Utah. He married his soul mate, Nan, on June 6, 1964 at the Cathedral of the Madeleine. He was president of the Pi Kappa Alpha fraternity and editor of two publications at the University of Utah where he graduated with a bachelor’s degree in Economics. He was later awarded an honorary degree from Southern Utah State College (Southern Utah University). Manny worked as an advertising vice-president for David W. Evans and Associates until he was appointed director of the State Tourist and Publicity Council. He went on to become president of A K Utah Properties, a Salt Lake City land development enterprise which created the Salt Lake International Center west of the Salt Lake City International Airport and the Triad Center in downtown Salt Lake City. He is survived by his sisters Georgia (Richard, deceased) Herron and Andrea Rebecca (Hub) Hanson, three children, David Emanuel Floor, Gina Marie (Allen) Luke-Throndson, and Michael Patrick Floor, 3 grandchildren, and 7 great-grandchildren." He was preceded in death by sons John and Daniel, who died after birth, his parents, his brother William A. (Betty, deceased) Floor, and his grandson, Justin Emanuel Luke. Manny was a devout Catholic whose greatest love was to spend time with family. A funeral mass will be celebrated Friday, October 23rd, at 10:30 a.m. at Saint Ambrose Catholic Church, 1975 S. 2300 E. Committal: Mt. Olivet Cemetery, 1342 E 500 S. Post condolences and memories to: https://www.facebook.com/manny.floor.1

The family of Emanuel "Manny" Andrew Floor created this Life Tributes page to make it easy to share your memories.

Send flowers to the Floor family.