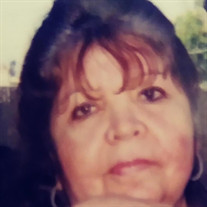 It is with a heavy heart we had to say goodbye to the strongest, fearless, companionate, wife, mother, grandmother, great-grandmother, sister, aunt, cousin, and friend. We know she was embraced by the Lord the moment she arrived home. Erma Was born August 16, 1940 in Madrid, New Mexico. She is the daughter of Grace Nieto Padilla. She is the sister of Mary Morland, Evelyn Tonge, Katie Gonzales, Nellie Regalado, Vivian Padilla, and George Padilla. Erma met the love of her life Ubaldo Walter Avila at a dance at the Centro Civico in Salt Lake City. Her beauty caught his eye and there was no turning back. Soon after on June 28, 1959 in Elko, Nevada she became Mrs. Erma Avila and then spent the next 62 years together building a beautiful family. Erma Avila was a strong and fierce woman who loved nothing more than watching her family shine, she was tough as nails, with most pictures of her with a stern face, and when her kids would tell her to smile during a photo, she replied with a grin and giggle and say "I ain't got nothin' to smile about," and her family would always reply with a roar of laughter. Erma was the epitome of someone whose actions spoke louder than words. She never missed an important event when it involved her family, whether it was a baptism, communion, quince, sporting event or graduation; if it meant something to her family, she was there. Some people always say "I love you," but she always proved it. She was durable and straightforward, but she would never let the people she loved leave without a warm embrace and a smile. As tough as the world was, Erma was tougher and her children admired her for her strength and willingness to be the rock of the family no matter the situation, she carried her family forward until her last breath. She was true example of unconditional love. Erma is survived by her husband, Ubaldo Walter Avila, Children, Richard Avila, Tony Avila, Molly Gonzales, Arthur Avila, Corina (Arthur) Vierra, Frank (Lisa) Avila, Orlando (Belen) Avila and Rachel Avila. Grandchildren, Elisabeth, Angel, Adriana, Anthony, Arlene, Heron, Lil Molly, Michael, Andrew, Lil Arthur, Lance, Shayla, Landon, Angelia, Yvonne, Marissa (Anthony), Felicia, Lil Frankie, Lil Orlando (Tana), Deonno, Diego. Great-grandchildren, James, Mariana, Tatiana, Cymry, Bradley, Brynlee, Camden, McKenna, Grayson, Chloe, Kora, Parker, Hunter, Gabriel, Ariana, Jayden, Alleysaya, Naielli, Nevaeh, Jordon, Ryder, Lucas, Syli, Lillianna, Mauricio. Great-great- grandchild, Gabriel She was loved by many Niece’s, Nephew’s, and cousins, and she loved them back just the same. Erma is preceded in death by her mother, Grace Padilla, (Nino) Ignacio Pena, Sisters, Katie Gonzales, Nellie Regalado, brothers, Vivian Padilla & George Padilla, Grandchildren, Ricky Avila, Derick Avila, and Annie Grace. A viewing will be held on Wednesday April 20th from 6:00pm to 8:00pm with a rosary to start at 7:00pm at Neil O'Donnell Funeral Home 372 E 100 S, Salt Lake City, UT 84111. The Funeral Mass will be celebrated at 12:00 noon, Thursday, April 21st at St. Ann Catholic Church, 450 East 2100 South. Lunch to follow after funeral mass at St. Ann’s lunch room across from the church. Committal service will be held at Mt. Calvary Catholic Cemetery at a later date.

It is with a heavy heart we had to say goodbye to the strongest, fearless, companionate, wife, mother, grandmother, great-grandmother, sister, aunt, cousin, and friend. We know she was embraced by the Lord the moment she arrived home. Erma... View Obituary & Service Information

The family of Erma L. Avila created this Life Tributes page to make it easy to share your memories.

It is with a heavy heart we had to say goodbye to the strongest,...

Send flowers to the Avila family.