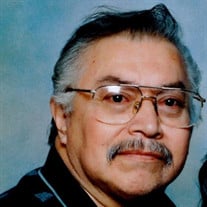 Our loving husband, father, grandfather, and brother was peacefully taken home to heaven at the age of 78 on Thursday, August 27th 2020. He was born October 19th 1941 in Montrose Colorado to Eufracio and Louisa Vigil. He grew up and attended schools in Dragerton, Carbon County. He served honorably in the United States Army during the Korean Conflict. Upon his return he married the love of his life Pauline Martinez on July 13, 1974 in Salt Lake City, Utah. He received his cosmetology license and began his career at St. Joseph Villa. He was a candidate for the Diaconate program but was unable to complete the course due to health issues. He was a dedicated volunteer for Sacred Heart Church and overlooked the C.C.D program for many years. He enjoyed music and had his own band called “Fidel Y Sus Sentimentos” alongside his children Kathy, Mark and Jeff. He is survived by his wife Pauline. Children, Kathy (Kristi) Valdez, Mark (Phyllis) Maez, Jeff (Janet) Maez, Lisa Madrid, Benita (Rosendo) Vigil. Siblings, Leve (Carol), Lucinda (Tony), Floyd (Arlene). Many grandchildren, great grandchildren and a great-great grandchild, many nieces and nephews, very special niece Grace and much love to the Moreno family for all their love and support to “Tio”. Preceded in death by his parents, brothers Emilio, Eufracio Jr., sisters, Tiny, Juanita, Clara and Sofia, mother-in-law Benita Martinez and son Paul Vigil. He enjoyed spending time with family and the Annual Vigil Christmas parties were his favorite as long as he received gifts from everyone who came. Relaxing on the porch with mom and all the different types of animals he adopted especially his very own Tank, Osito, Otis,Lillie Bug and Cotton and that is just to name a few with a special cat named Smokey. He was quite the jokester and always making everybody laugh especially all the caregivers toward the end of his life. Now that you’re gone dad we know that you are with Paul making up for lost time maybe even joking around and having a few drinks. Please watch over us, your family here on earth. We will think of you every day when we listen to Mexican music especially “Los Ojos De Pancha”. Until we hug again, rest easy, sleep sweet, and never forget we love you forever dad. Special appreciation to the Staff of the VA Hospital and Community Nursing Services. Holy Rosary will be recited Wednesday, September 2, 2020 at 11:00 a.m. followed by the celebration of the funeral mass at Our Lady of Lourdes Catholic Church, 670 South 1100 East, where friends may call from 10:00 a.m. -11:00 a.m. Committal, Mt. Calvary Catholic Cemetery, 4th Avenue and T Street. In lieu of flowers, donations may be made to the Humane Society of Utah, 4242 South 300 West, Murray, Utah 84107.

Our loving husband, father, grandfather, and brother was peacefully taken home to heaven at the age of 78 on Thursday, August 27th 2020. He was born October 19th 1941 in Montrose Colorado to Eufracio and Louisa Vigil. He grew up and attended... View Obituary & Service Information

The family of Fidel Orlando Vigil created this Life Tributes page to make it easy to share your memories.

Our loving husband, father, grandfather, and brother was peacefully...

Send flowers to the Vigil family.