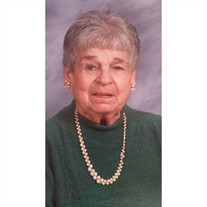 \r\n3/17/1921 - 3/26/2016\r\n \r\n\r\nOur beloved mother, grandmother, great-grandmother, and great, great grandmother, Florence A. Hardy, age 95, of Salt Lake City passed away peacefully on Sunday, March 26.\r\n\r\nFlorence was born on March, 17, 1921 in Salt Lake City, Utah. She was the daughter of John and Catherine Oliver. Florence graduated from South High School. After graduation she worked at a local factory making cookies. When World War II began she worked for the government at a local Arms plant making bullets. After the war she worked for a commercial laundry company. During the 1950s Florence and her girlfriends loved to go dancing at the Coconut Grove Club. This is where Florence met Jim Hardy, a Sargent in the Utah National Guard. It was love at first site for both Florence and Jim. They married in 1953. Florence and Jim raised three children (Gerry, Dick, Mike). The family joined Saint Patrick's Catholic Church in Salt Lake City. Florence was a member of Saint Patrick's Parish for over 63 years. In addition to being a great mother, she enjoyed being with friends and family and participated in local Bowling Leagues and was a member of a number of Card Playing Clubs. In her later years she loved playing Bingo and going on scenic rides at the Avenues Courtyard Assisted Living where she lived for over 6 years. Florence will be missed by all who knew her special personality.\r\n\r\nFlorence is survived by her Son, Dick (Rene'), eight grandchildren, 10 great grandchildren, and three great, great grandchildren. She is preceded in death by her parents, John and Catherine, her husband Jim, step son, Michael, step daughter, Geraldine, her sister's, LaNora, Mary, Beverly, and Brother Sam.\r\n\r\nSpecial thanks to Florence's niece, Geri Mondragon, and her grandson, Shawn Hardy and his wife Pam. Their enduring love and kindness brought such joy to Florence that words cannot express.\r\n\r\nA Funeral Mass will be celebrated Friday April 1, 11:00 am at Saint Patrick Catholic Church 1040 West 400 South. A Vigil service will be held Thursday March 31, 7:00 p.m. at the Neil O\'Donnell & Sons Mortuary 372 East 100 South where friends may call from 6:00-7:00 p.m. Committal Mt. Calvary Cemetery 4th Ave & T Street.\r\n\r\n

The family of Florence A. Hardy created this Life Tributes page to make it easy to share your memories.

Send flowers to the Hardy family.