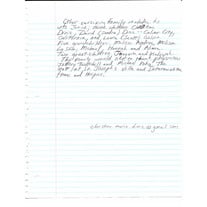 1932-2015\r\n"Gone Camping"\r\n \r\nFranklin Louis Diniz, age 83, passed away peacefully at home from congestive heart failure.\r\nBorn November 8, 1932 in Fall River, Massachusetts to Nicholas Tolentino Diniz and Alminda Lima Mederios Diniz.\r\nFrank joined the Marines at the age of 17. While traveling to a military assignment he met the love of his life Janice Arline Green Diniz. Frank and Janice were married September 5, 1953.\r\nA hard worker frank built his own home in Rose Park at the age of 22. He was a long time parishioner at Our Lady of Guadalupe.\r\nAn avid camper, Frank took his home on wheels out every chance he got.   He enjoyed the solitude of the mountains and the companionship of Janice his wife of 62 years.\r\nHe retired from the Union Pacific Railroad boosting of a 1954 seniority date Since Salt Lake was not the home of his Red Sox, he settled for tickets and often attended Bees games.\r\nOne of 10 children he is survived by his eldest sister Phyllis Agnes Moniz, "Pippa" who took the role as mother when he was a toddler. Other surviving family includes his wife Janice, three children Christine Diniz, David (Sandra) Diniz, of Calver City, CA, Laura (Scott), Gelvin. Five grandchildren Melissa, Andrea, Melissa, La Shea, Michael, Hannah and Aliana. Two great grandchildren Joaquim and Maliyah.\r\nThe family would like to thank physicians Jeffrey Twitchell and Michael Poku. The staff at Saint Joseph Villa and Intermountain Home & Hospice.\r\nA Vigil service will be held Monday, January 4, 2016, 1:00 p.m. at the Neil O'Donnell & Sons Mortuary 372 East 100 South, where friends may call from 12:00-1:00 p.m. Committal Redwood Road Memorial Cemetery 6500 South Redwood Road.\r\n \r\n\r\n \r\n\r\n

The family of Franklin Diniz created this Life Tributes page to make it easy to share your memories.

Send flowers to the Diniz family.