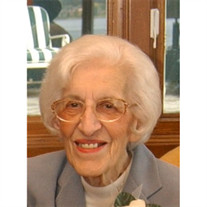 1919 - 2017\r\nHelene Luras (Kerikas) died peacefully in Salt Lake City, Utah, on June 16, 2017 at the young age of 97.7. Helene is survived by her sons, Jim (Tammy) Luras and John (Dahlia) Luras; her Grandchildren, Christopher James (Melissa) Luras, John Michael Luras, Andrew Joseph Luras, Maria (John) DeAlba, Gustavo Carrillo, and Norman Hess; her Great Grandchildren, Chrysander Constantine Luras and Alyxandra Eleni Luras; and her siblings, Mike (Sharon) Kerikas and Maxine Kerikas. She is preceded in death by her husband Chris Luras; her parents; her siblings Viola (George) Nicolatus, Mary (Basil) Anton, Rita (George) Pulos, and Effie (Ralph) Carr; and her nephew John (Nikki) Anton.\r\nHelene was born on October 17, 1919 in Salt Lake City, Utah, to John and Argero Kerikas. After she graduated from West High School and Stevens Henagar College, Helene took a job at RKO Pictures as an Administrative Professional, which was her favorite job. She then worked at the Board of Pardons; she continued to rave about the prison food well into her nineties. Prior to World War II, she met her handsome Chris Luras, the love of her life. They married December 30, 1945 and worked together to successfully run Liberty Bell Bakery in Salt Lake City, Utah, and Sarul's, a restaurant/bar, in Pasadena, California. Helene was a master at helping run the businesses and raising her boys, Jim and John.\r\nShe loved her "boys" more than anything. Until the end, she was a direct part of both Jim and John's family. She was the one loving constant and supporter, as they both raised beautiful families of their own. She was more than a grandmother to Chris, John and Andy, as she helped raise them to be smart, kind and loving adults. Yiayia did not need to try hard to be the very best grandmother in the world; she was born to love and to brighten the darkest of days. She was happiest when surrounded by her grandchildren and had a special relationship with each and every one; she even actively played with her great-grandchildren on the floor at the age of 96 years old. As a loving sister, she genuinely cared and kept in touch with her siblings. Genetically speaking, Helene was not capable of hatred, hostility, or jealousy; she only knew how to love.\r\nFrom her dislike of Bing Crosby to her conspiracy theories regarding the death of Russ Colombo, her family will always remember the little things that Yiayia use to enjoy chatting about. She had an affinity for slot machines, television game shows, and "cop" shows. And, of course, "movies weren't as good as they use to be". We will never forget Wilt, Charlie Hustle, and Landry, as those were her favorite sports figures. Crossword puzzles, ironing, typewriting and family pictures will always remind us of Helene. Her kitchen specialties such as Greek potatoes, Greek meatballs and breakfast dishes were excellent, though she was quick to mention that she was never as good as her "old man" in the kitchen. Did she ever miss a night without a 7 and 7, or two? Anything besides Seagram's Seven would fall significantly short of her expectations.\r\nHelene took pride in purchasing the "best gift" for birthdays and holidays. From gaming systems to grandfather clocks, her gifts were memorable and timeless. However, she never realized that she will forever be the very best gift in all our lives. Undoubtedly, she will always be a part of our daily lives and we will miss her loving personality and bright smile. Helene has been truly looking forward to seeing her old man for many years. We all knew that he was finally ready for her.\r\nA funeral is scheduled for Friday, June 23rd at 11:00 am at the Holy Trinity Cathedral, 279 South 300 West, in Salt Lake City with a reception to follow after the interment. The viewing will be held on Thursday, June 22nd between 6:00 and 8:00 pm, with a prayer service at 7:00 pm at Neil O'Donnell and Sons Mortuary, 372 East 100 South. Interment, Mt. Olivet Cemetery, 1342 East 500 South.\r\nIn lieu of flowers, please send donations to the Holy Trinity Cathedral. A special thanks to her little sister Maxine for always taking care of her big sister.\r\n \r\n\r\n \r\n\r\n

The family of Helene Luras created this Life Tributes page to make it easy to share your memories.

Send flowers to the Luras family.