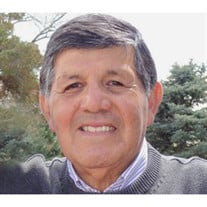 Our wonderful husband, devoted father, proud grandpa and brother, Jimmy A. Vega, aged 84, passed away January 10, 2016, in Salt Lake City, Utah, after a brief but courageous battle with cancer.\r\n\r\nBorn May 3, 1931, to Jesus and Bernadette Vega in Durango, Colorado, Jimmy was raised in Carbon County, Utah. He graduated from the College of Eastern Utah, receiving his certification in Auto Mechanics. After college, he served his country as Specialist/Corporal in the U.S. Army during the Korean War. In 1955, he met and married Evelyn Gallegos, and recently celebrated their 60th wedding anniversary. Together Jimmy and Evelyn raised their five children in Salt Lake City. During this time and even into his retirement, he worked for General Distributing Company and was always very proud of his association with Budweiser.\r\n\r\nJimmy was a devoted member of Saint Patrick's Catholic Church for over 50 years, serving the parish in whatever capacity he was called on to fulfill. He was a founding member of the Holy Name Society at Saint Patrick's, providing assistance in the parish ministries to those in need. As Lector and Minister of Communion, as well as in his service in various parish councils and committees, he was held in great esteem among his fellow parishioners. In addition, for too many years to number, his organization of the church carnival beer garden made that a highlight of the event.\r\n\r\nJimmy maintained a passion for the out of doors his entire life. He hunted and fished with his son, brothers and nephews in his younger years, always returning with great stories. Not necessarily about the "one that got away," but stories of their good time and a plan for a bigger trip the next. In more recent years, Jimmy especially enjoyed the annual camping trip to Arches National Park each fall. After the day's hiking and sightseeing, he would organize a lively poker game, making certain everyone followed not only Hoyle's rules but the house rules as well.\r\n\r\nJimmy is survived by his beloved wife, Evelyn, his loving children, Ann, Susan, Paul, Teresa, Catherine, and their spouses; his adoring grandchildren, Elisabeth, Joseph, Marcos, Victor, Lucia and Lilianna; his brother John and sister Anita, along with countless other family and friends who were blessed to know him.\r\n\r\nJimmy's family would like express a deeply felt and grateful thanks to all the doctors, nurses and staff at the Salt Lake VA Hospital for their kindness and steadfast care during his illness. Their humanity and dedication to all veterans remains extraordinary.\r\n\r\nA Rosary will be recited at 10:30 am, followed by Mass of Christian Burial at 11:00 am, Friday, the 15th of January, 2016, at Saint Patrick's Catholic Church, 1040 West 400 South, Salt Lake City, UT. Committal will be at Utah Veterans Memorial Park 17111 South Camp Williams Road, Bluffdale, UT.\r\n\r\n"Dad, we miss you so very much and will keep you in our hearts always."

Our wonderful husband, devoted father, proud grandpa and brother, Jimmy A. Vega, aged 84, passed away January 10, 2016, in Salt Lake City, Utah, after a brief but courageous battle with cancer.\r\n\r\nBorn May 3, 1931, to Jesus and Bernadette... View Obituary & Service Information

The family of Jimmy A. Vega created this Life Tributes page to make it easy to share your memories.

Send flowers to the Vega family.