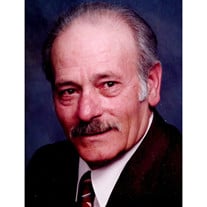 1929-2016\r\n\r\nOur beloved husband, father, grandfather, great grandfather, brother and uncle, Joe Saputo, age 87, of Salt Lake City, passed away on October 9, 2016 at home and of natural causes. He was born on September 21, 1929 in Palermo, Italy to Giovanna Barrela and Gioacchino Saputo. Joe became a naturalized American citizen on September 12, 1977. He learned his trade as a brick and stone mason in Italy. He retired from the SLC Parks and Rec. after 27 years as Field Supervisor; continued to work for the city as a crossing guard for several years and later retired from Valley Mental Health as a van driver after 11 years. Most recently, at age 85, even worked as a host at a local Italian restaurant, Per Noi. Joe was a Catholic and a member of Saint Ann parish. He was a member of the Italian-American Civic League of Utah; he was honored with a lifetime membership. His favorite pastime was playing cards with friends, and watching T.V. especially sports and the Utah Jazz. In the past, he enjoyed fishing occasionally.\r\nHe was married to Gloria, his beloved wife of 40 years of which they had two daughters: Margaret and Gloria Gina and four grandchildren. Gloria will always remember their song, \"Sweet September\". Joe also had four daughters from a previous marriage: Gianna Brown, Franca Saputo, Vita Garrett, and Adriana Ortega. The total number of grandchildren is 16 and great grandchildren are seven.\r\nJoe had five brothers and three sisters. Brothers: Francesco and Giovanni, and preceding him in death, Antonino, Enzo, and Salvaltore. Sisters: Gina, and preceding him in death, Maria and Concetta.\r\nA special thank you to Dr. C. Christian Romney, who took especially good care of Joe over the years.\r\nJoe will be fondly remembered and missed by all who knew him. He was a kind and gentle man and a respectable man. He was a pillar of the community. His grandson, Cristiano, remembers his nonno (grandpa in Italian) that \"He liked spa sghetti".\r\n\r\nA Funeral Mass will be celebrated Tuesday October 18, 12:30 p.m. at Saint Ann Catholic Church 450 East 2100 South. Rosary will be recited at 12:00. Friends may call from 11:00- 12:00 p.m. all at Saint Ann's. Please see full obituary online at odonnellandsons.com and also in the Intermountain Catholic Newspaper.

The family of Joe \"Gioacchiono\" Saputo created this Life Tributes page to make it easy to share your memories.

Send flowers to the Saputo family.