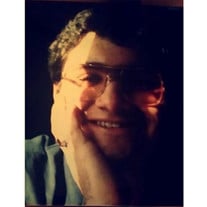 It is with a sad heart, but also with joy that we wish to celebrate John Calfo\'s life . After a long struggle with just about everything you can throw at a guy, John succumbed to his illnesses. We were able to have a good visit with him at the hospital over the weekend. Both of his children, Christopher Calfo and Danielle Rose Calfo, were able to give him a kiss goodbye, while he still knew them and tell him he loved them. In the end, he suffered a massive heart attack and left us at about 3:45 on Tuesday, October 13th.\r\n\r\nJohn was born in Salt Lake City to Kaye and Charles Calfo, the oldest of two boys.  He was raised Catholic and attended all Catholic schools including Cosgriff, Saint Ann/Kearns and Judge Memorial High School class of 1983.  It was at Judge that he would meet Janine Teissler, whom he would marry 10 years later in 1989.  Both shared a love of the Tolkien novels and would pass notes in Elvish during class.\r\n\r\nBefore he got sick, John enjoyed serving the Catholic Church at Saint Patrick\'s, Saint Ambrose, Saint Catherine\'s and Saint Ann\'s in the capacity of music minister. He was a  master level pipe organist and played from high school in the 1980s until 2010, when he suffered his first stroke.  He had also worked for Mancuso\'s Religious Goods  Store in Salt Lake City.  John was a member and co-dean of the American Guild of Organists - Salt Lake City Chapter and the National Pastoral Musicians Society.  His early music education came from Mormon Tabernacle organist, Clay Christiansen.  His passions, outside of Church music included just about anything relating to trains, attending the Renaissance Fair in Marriott-Slatersville, and had lately started playing Texas Hold \'Em poker with his wife, Janine.\r\n\r\nJohn Calfo is preceded in death by his grandparents, Angelo and Angelina Calfo, John and Mary Forhan and his aunt Mae Koski  and his uncles, Angelo Calfo, Jack, Chuck and Jerry Forhan.  John is survived by his wife, Janine, his two children  Danielle and Christopher, his mother Kaye, his father Charles and his brother Michael. And many cousins in Utah, California and Nebraska.\r\n\r\nAs per his wishes, he will be cremated and a memorial Mass will be held at Saint Ann\'s Church at 450 East 2100 South in Salt Lake City on October 23rd at 1:30 pm with an hour visitation.\r\n\r\nWe want to thank all of you for your well wishes, thoughts and prayers. I know that he is at peace now.

It is with a sad heart, but also with joy that we wish to celebrate John Calfo\'s life . After a long struggle with just about everything you can throw at a guy, John succumbed to his illnesses. We were able to have a good visit with him at... View Obituary & Service Information

The family of John Charles Calfo created this Life Tributes page to make it easy to share your memories.

It is with a sad heart, but also with joy that we wish to celebrate...

Send flowers to the Calfo family.