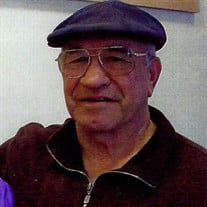 Jose' (Joe) Federico (Fred) Gallegos The Original Fish Whisperer June 29, 1933 ~June 4, 2020 Joe Fred was an entrepreneur, philanthropist, concrete mason, landlord, expert pool player, and homebody. He was born in La Jara/Cuba, New Mexico to Alfonso T. and Elia S. Gallegos. He was the fourth of nine children. He viewed his family as very successful and was proud of everyone’s accomplishments. Joe Fred’s schooling was at Riverside Elementary, Jackson Junior High, and West High School. He graduated from Salt Lake Community College with a degree in graphic arts. Joe Fred was a talented artist specializing in water colors. He loved the holidays and decorating for them was one of his special joys. His proudest achievement was to work with his four sons on different work projects such as the south wall of East High School, the I-80 freeway section from Salt Lake City to Park City, and on his daughter's project with the Blessed Virgin/St. Francis of Assisi statues. He was an accomplished athlete, being a four-time Golden Gloves champion. Joe Fred has many trophies still on display at West High School for his track and field, swimming, and tennis achievements. Fondly know as Pops by his children, he represented the United States in the U.S. Olympics in the boxing category while he was stationed at the San Francisco Presidio Army Base in 1952. He owned a successful business called Fred's Concrete and worked at the Rotary Boy's and Girl’s Club, Bramer, and as an engineering land surveyor. He was recognized as a world class cement contractor by Local 568. Of note was Joe Fred’s national work in LDS Temples on their baptismal fonts and Camp Kostopulos. One of his favorite pictures was a hand drawn photo from a class project done by Rowland Hall students. He loved volunteering at Lincoln Elementary School. He made many lifelong friends through work, volunteering at the downtown senior center, and in playing team sports. He is survived by his sister Gloria Peters (Bill); brothers Alphonso Jr., Andrew (Joan), and Richard; sister-n-law Josephine Roller; daughter Federica (Feek's), son Mark (Desiree'), son Daniel;, grandchildren Tommy (Sandi), Nicole (John), Markus, Michael, Emiliano, Marcelino, Cassie, Quinton, Ryan, and Junior; great-grandchildren Isaac, Taylor, Emily, Markus, Bella, Thomas Jr., Madelynn & Matthew; and several nieces and nephews. He is preceded in death by his parents, brothers Epifanio, Josephine, Arthur, Efren, his wife Jenny Quintana and sons Isaac and Jerome. The family would like to thank his caregivers, especially those at the Veterans Administration, specifically Dr. Anne Daly and her staff, his personal nurse Rene', his neighbors Lee and Karen, Amy and Carol Pino, and his son Daniel. The following memorial events are scheduled: Wednesday, June 17, Viewing/Visitation from 6:00 - 8:00 p.m. at Neil O'Donnell Funeral Home, 372 East 100 South; Thursday, June 18, Funeral Mass 11:00 a.m. at Our Lady of Lourdes Catholic Church, 670 South 1100 East. Afterwards a caravan will follow to Neil O'Donnell Funeral Home for a celebration of life ceremony; Friday, June 19th at 12:00 p.m.; Committal of Cremations, Mt. Calvary Cemetery, 4th Avenue and T Street, with bagpiper and military honors. The family requests you wear something green and remember ten things we might not have known about Joe Fred. Please wear your mask/or a mask will be provided for you. Thanks for your cooperation in this matter.

The family of Joseph Joe Gallegos created this Life Tributes page to make it easy to share your memories.

Send flowers to the Gallegos family.