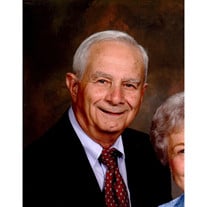 10/21/1926 - 2/4/2017\r\nOur loving and beloved husband, father, grandfather, great-grandfather, uncle and friend, Joe passed away peacefully in his home February 4th.\r\nBorn in Salt Lake City, the only child of Gino and Minnie Giovacchini, who raised him to be the uniquely gifted, kind and genuine man he was.\r\nHe married his special angel, Maxine Rino, on April 6, 1951. They spent a blessed life together, raised a strong and close family, worked to provide service to others in their pharmacies, and were active in many church, civic, professional and athletic organizations in their community.\r\nJoe excelled academically, athletically and musically, honoring his family's strong work ethic. He graduated at 15 from West High School, attended George Washington University and graduated in 1947 in pharmacy. He was a member of the Theta Delta Chi fraternity and played basketball at GW, led his team in scoring, and was recognized as the school's outstanding athlete. He was also accomplished at baseball, softball, track, racquet sports, bowling, bocce and golf.\r\nJoe was the ultimate professional pharmacist. He owned 3 neighborhood pharmacies, where patrons from many walks of life came to know him as personable, knowledgeable, and thorough. He provided pharmacy care to St. Joseph Villa residents for many years. In 1987, he was awarded the prestigious national service award, The Bowl of Hygeia. In 1994, he received the award for Exemplary Service by the Utah State Division of the Aging. Throughout his career, he was acknowledged with numerous other professional recognitions from the Utah and American Pharmaceutical Associations.\r\nLongtime member of St. Ambrose Catholic Parish, his faith was strong and central to his life. Involved in parish council, fundraising, ushering at Sunday Mass, and was the current president of the 49er Club. Lifetime member of the Knights of Columbus. He loved coaching in the youth sports program, and had a tremendous positive impact on the lives of many.\r\nJoe was very proud of his Italian heritage and was a life-long member of the Italian-American Civic League, where he shouldered many responsibilities. He was president of the Southeast Lions Club. He remained active and involved in all, and was still bowling in his leagues this last week.\r\n\r\nHis family was his greatest joy. Joe and Maxine loved to dance, bowl and go to Wendover together. He was proud of his children and grandchildren. He travelled the country and world to visit, to celebrate graduations, and to watch them play their chosen sports. Everyone enjoyed trips to the bowling alley and golf course, and many late-night Canasta games. His great-granddaughters giggled when Grampy could always find a quarter behind their ears. While strongminded and tough, he modeled how true strength emanates from gentle kindness.\r\nSurvived by his sweetheart Maxie, sons and daughters-in-law Marty and Robyn, Paul and Tanya, and Joey and Frannie; grandchildren Tony (Kate), David (Coral), Michael, Nick, Dan, Marcus, Lizzie and Derek; and great-granddaughters Giuliana and Emilia. Sister-in-law Evelyn O'Donnell (Richard-deceased), brother in-law Ed Rino (Linda), and many cherished nieces and nephews.\r\nMemorial Mass will be celebrated at St. Ambrose Church, 1975 South 2300 East, on Friday, February 10, 11:00 a.m., where friends may call 1 hour prior. A viewing will be held at the church on Thursday, February 9, at 6:00 p.m., Rosary at 7:00p.m.. Graveside service immediately following the Mass at Mt. Calvary Catholic Cemetery.\r\nThe family suggests donations to Shriners Hospital for Children in Salt Lake City, online at shrinershospitalsforchildren.org, or the St. Ambrose Building Fund.\r\n\r\nI'll be loving you always - M

The family of Joseph Martin Giovacchini created this Life Tributes page to make it easy to share your memories.

Send flowers to the Giovacchini family.