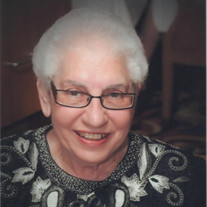 Josephine Rita (Glorioso) Cowand passed away on December 13, 2019. Jo was born in Price, Utah to Ross and Rose Glorioso on November 10th 1936. After graduating in 1955 from Carbon High School, she moved to Salt Lake where she worked at Continental Bank. Jo took up skiing, spending time on the slopes with her friends. She met Sid Cowand while living in Salt Lake, later the two married on April 20, 1968. Despite what was often shared at family gatherings and parties, she did not jump off a ladder, holding Sid down until he said yes to marriage. They built many memories with friends throughout the years, celebrating birthdays and holidays, while also developing long lasting friendships through their participation with the Knights of Columbus. In 1970 they welcomed their daughter Jennifer and then in 1973, their son Mark. Sid’s position in the Army took the family to Korea for two years, then San Francisco where Sid retired and they returned to Salt Lake where they settled. Jo began working at the Salt Lake VA Hospital. In 1994 their first granddaughter Breanna was welcomed, followed by Sydnie in 1996, Kennedy in 2014 and great-granddaughter, Selena in 2018. Jo was the Italian grandmother everyone wished they had, she always made sure her loved ones were warm, fed and safe, to the point where family had bets on how soon they would be in trouble for not wearing a coat. Jo loved her family through the food she cooked. Her spaghetti sauce was true to her Sicilian roots and her pizzelles were synonymous with the holidays. Jo was passionate about politics and Ute football. She was known to smuggle amaretto into Ute games and was an avid watcher of MSNBC news. Jo was a member of St Joseph The Worker Catholic parish. Services will be held at St. Joseph the Worker on Friday, December 20 2019. A rosary will be held at 10:00am, followed by mass at 11:00 am. Graveside services will begin at 12:00 at Mt Calvary Catholic Cemetery, dinner following at St. Joseph the Worker at 12:45pm. Family and Friends are welcome to the services. Survived by husband Sid, daughter Jennifer, granddaughters Breanna (Selena) and Sydnie, son Mark (Kate, Kennedy), nephews, nieces Preceded in death by her sister (Mary Pestotnik), brother (Joseph Glorioso), parents (Rose and Ross)

Josephine Rita (Glorioso) Cowand passed away on December 13, 2019. Jo was born in Price, Utah to Ross and Rose Glorioso on November 10th 1936. After graduating in 1955 from Carbon High School, she moved to Salt Lake where she worked at Continental... View Obituary & Service Information

The family of Josephine R. Cowand created this Life Tributes page to make it easy to share your memories.

Send flowers to the Cowand family.