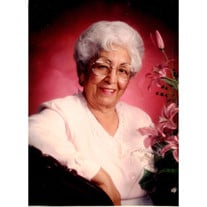 07-11-1926 ~ 12-05-2017\r\n\r\nWe said our last goodbye to our dear mother, grandmother, sister and aunt on December 05, 2017. Mom was surrounded by her loved ones and we pray it made her departure easier.\r\n\r\nMom was born in Laramie, Wyoming July 11, 1926. She was one of twelve children born to Jose Benancio and Francisqueta Ruybal Candelaria. Mom learned that life is tough after losing her parents and a brother within a year and months of each other. That is difficult for anyone let alone a child. After leaving the orphanage she was sent to, she took on responsibilities for some of her younger siblings that were the released to her. She had ten children and we all learned from her nothing in life is free, it takes hard work. Some of us may have thought she was hard on us, but we all agree that helped make us the adults we became, just as mom's hardships taught her. Mom's first language was Spanish, but she did not teach any of her children her language because of the discrimination she and her siblings suffered as children. Mom retired from LDS Hospital and lived with her daughter Evie for fifteen years after the death of her husband Manuel Lobato. The last ten years she lived with her daughter Patricia until mom's death.\r\n\r\nMom was preceded in death by her parents, seven brothers, and three sisters, and her husband.\r\n\r\nShe is survived by one sister Stella Candelaria, her children Dennis(Kristie), Georgia, Anthony(Darlene),Tom, Johnny, Lennie(Carmen deceased), Ernie, Jose, Patricia(Steve deceased) and Evie(Ray). She is also survived by sixteen grandchildren and twenty-three great grandchildren. Mom had many friends however she outlived most of them. We want to recognize the unconditional love and care that was given to our mother by her two daughters Evie and Patti, who gave up some much of their lives to care for our mother. We were able to keep our mother longer in our lives because of the strong partnership between our sisters and Dr Margaret Lunt and Shannon. We so very much appreciated the attention, respect and wonderful treatment of our mother and our family by Inspirational Home Health Hospice. (Steve S, Chris, Cheryl, G.G. and Steve).\r\n\r\nA funeral mass will be held be celebrated Saturday, December 9, 2017 at 10:00 a.m. at Saint Patrick Catholic Church, 1040 West 400 South. A vigil service will be held Friday, December 8, 2017 at 8:00 p.m. at Neil O'Donnell and Sons Mortuary, 372 East 100 South, where friends may call from 6:30 - 8:00 p.m. Committal, Mt. Calvary Catholic Cemetery, 4th Avenue and T Street,

The family of Julia Candelaria Lobato created this Life Tributes page to make it easy to share your memories.

Send flowers to the Lobato family.