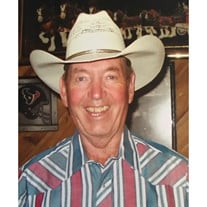 May 28, 1935 - April 30, 2017\r\n\r\n\r\nLarry Walter Schroeder died on April 30, 2017 surrounded by his family, in Ontario, Oregon. He was born May 28, 1935 in McCall, Idaho to William Fredrick and Helen Hedvig Gunther Schroeder.\r\nAfter high school, Larry went to Jordan Valley where he worked as a ranch hand and cowboy until he moved to Klamath Falls, OR in 1953 where he worked as a pin-setter in a bowling alley and a logger. Larry joined the army 1953-1957) and was a heavy equipment operator in Korea. He then returned to Jordan Valley and married Shirley, who had four children, and they had two children together. In 1960, Larry became a route salesman for Jewel Tea Company, and then began selling Farmers insurance in 1967. In 1982, Larry moved his family to Crescent City, CA where he bought and ran a poker-playing room. Larry and Shirley then became hotel managers in Oregon, Washington, Montana, and California from 1985-1996. Larry and Shirley then moved back to Payette and worked for Larry's brother, Robert Schroeder, selling pre-need funeral insurance. Larry then drove truck until he retired. Shirley and Larry divorced in 2000, when Larry moved to Meridian, ID to worked part time at a thrift store and part time doing farm work. In 2004, Larry married Julia (Grover Unterkircher) and moved to Ontario. Larry was fond of riding horses and gardening in his free time.\r\nLarry was preceded in death by his parents, eight siblings, first wife Shirley, two nieces and six nephews. Larry is survived by his wife Julia Schroeder; son Darrell (Dorathey) Schroeder; daughter Julie (Tom) Chereck; step-children Jack (Barb) Thompson Jr.; Rick (Carol) Thompson; Janice (Darrell) Ruth; Mark (Debbie) Thompson; Gail (Tom) Greco; Rodney Wherry; Neal (Carla) Wherry; numerous nieces, nephews, grandchildren, and great-grandchildren.\r\nFuneral services will be held Monday, May 8, 2017 at 11:00 a.m. at the Elks Lodge, 20 SW 3rd Street, Ontario, Oregon, where friends may call one hour prior. Interment, Rosedale Memorial Gardens, Payette, Idaho.\r\n\r\nIn lieu of flowers, donations may be made to the Elks Lodge, 20 SW 3rd Street, Ontario, Oregon 97914.

The family of Larry Schroeder created this Life Tributes page to make it easy to share your memories.

Send flowers to the Schroeder family.