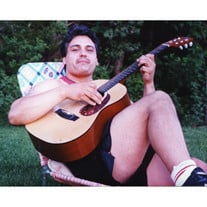 Leon Richard (Rickey) Murray 56;  passed away March 10, 2019 from a life long battle of PTSD and addiction. Born March 11, 1962 in Salt Lake City, Utah. He was the oldest Son of William "Bill" Hugh and Mercedes "Merci" Florence Murray. He attended Ogden City High School where he excelled in football, basketball and boxing. Rickey graduated high school in 1979.  In 1980 he joined the US Navy and served as a Gunner's Mate on the USS Shreveport in Norfolk VA. In 1990 he earned his degree as a Paralegal which allowed him to help friends and family members in need of legal advice. Rickey resided in Boise Idaho for the past 30 years.\r\n\r\nAlthough Rickey never married he deeply loved  Viatafe (Lucianna) Unatoa and her children Leilani and Uionne and always considered them to be his family.\r\n\r\nRickey was creative and a self taught artist who bestowed many of us with his drawings and paintings.\r\n\r\nAs a young boy, Rickey listened and watched his grandpa and uncle play the guitar and banjo which began his life long love for music. He taught himself how to play the guitar and write songs. His music gave his family many joyful and unforgettable moments like singing "My Girl" at a bonfire on the beach in California to "Sweet Child of Mine" at his Nephews Birthday party but mostly his original songs of "Irish Billy" and "Tortillas and Beans" were always the favorites at family parties.\r\n\r\nRickey's musical hero's were Stevie Ray Vaughn and Carlos Santana who he was planning to see in concert this summer.\r\n\r\nRickey is survived by his most beloved Mother Mercedes F. Murray, Valerie Murray (sister) , Johnnie Murray (brother), Teresa Gonzales (sister), Debbie Kendall (sister), Lisa (Henry )Murray (sister), Shannon (Stanley J.) Kasakevics (sister), and Annette Christina Saxton (sister).  Rickey was loved by many aunts, uncles, cousins, nieces, nephews, grand nieces, and grand nephews.  Rickey is proceeded in Death by his grandparents Joe L. and Maria P. Martinez, his father William H. Murray, and brother-in-laws Dave Kendall and Richard Gallegos.\r\n\r\nA Funeral Mass will be celebrated Friday, June 28, 2019 at 10:00 a.m. at the Utah Veterans Memorial Park Chapel, 17111 South Camp Williams Road.\r\n\r\n"When I come to the end of my journey and I've traveled my last weary mile, just forget if you can that I ever frowned and only remember the smile. Forget unkind words I've spoken, remember some good I have done, forget that I ever had heartache...and remember I did have some fun. Forget that I have stumbled and blundered and sometimes fell by the way. Remember I have fought some hard battles and won ere the close of the day. Then forget to grieve for my going, I would not have you sad for a day, but in the summer just gather some flowers and remember the place where I lay. And come in the shade of the evening when the sun paints the sky in the west, stand for a few moments beside me and remember the best."\r\n\r\n

The family of Leon Richard Murray created this Life Tributes page to make it easy to share your memories.

Send flowers to the Murray family.