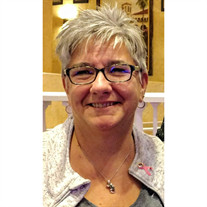 "LuAnn" " Lu"\r\n\r\n1957 ~ 2018\r\n\r\nLuAnn "Lu" Beitzel, 60, of Salt Lake City passed away Wednesday, February 14th, 2018 at the Huntsman Cancer Hospital.\r\n\r\nLuAnn was born September 11, 1957 in Venice, Florida to Arthur and Margaret Futch. She started school in Florida, but the family moved to Moscow, Idaho in 1966. LuAnn graduated from Moscow High School in 1975. While in high school she joined the ROTC program with her brother, Art Futch Jr. After graduation she married Karl Olson, they later divorced; she met and married Larry Beitzel and had two wonderful children: Kevin and Karen. Karen and her unborn child were killed in an auto accident on Mother's Day, 2006. Larry and LuAnn also later divorced. Through her journey in life she met two more very important people in her life, Wayne Burnett and then Jennifer Banks.\r\n\r\nLuAnn joined the Air National Guard and received many certifications for exemplary service and training. During this time she lived in: Athens, Greece, Frankfurt, Germany, Adana, Turkey, San Bernardino, California, Abilene, Texas, Spokane, Washington. Finally settling is Salt Lake City, she went on to work the rest of her career as a Retail Sales Manager at: Toys R Us, Tuesday Morning, KB Toys, Dollar tree and Godiva Chocolatiers.\r\n\r\nLuAnn enjoyed camping, fishing, crocheting, arts and crafts of all kinds (including helping Jen build a teardrop camper from the ground up), photography (especially taking pictures of flowers) and everyone she ever met. She has an infectious smile and a joyful look on life. She always had a positive attitude that she spread to all of her family, friends and co-workers.\r\n\r\nHer courageous battle with cancer was not going to take her down without a fight,She fought the fight to the unexpected end all the while inspiring others with her can do attitude; she will be forever missed by those whom she met, even for a brief moment, those who knew and loved her.\r\n\r\nShe is survived by her partner, Jen Banks; her son, Kevin (Mindy) Beitzel; her father, Arthur Futch, Sr,; her siblings; Arthur (Lee) Futch, Jr., Hazel (Jon) Thompson, Steve (Olga) Futch and Amanda Futch Bauer; grandchildren, Kayleigh and Alexander Beitzel; several nieces and nephews and her extended family and friends.\r\n\r\nShe is preceded in death by her mother, Margaret, daughter Karen and her unborn grandchild.\r\n\r\nA celebration of life will be held on Tuesday, February 20, 2018 at 10:30 am at Neil O'Donnell and Sons Mortuary, 372 East 100 South.\r\n\r\nIn lieu of flowers donations may be made in LuAnn's name to Huntsman Cancer Hospital.\r\n\r\nMemories and condolences may be shared with the family on LuAnn's memorial webpage at www.odonnellandsons.com\r\n\r\n \r\n\r\n

The family of Lucretia Annice Beitzel created this Life Tributes page to make it easy to share your memories.

Send flowers to the Beitzel family.