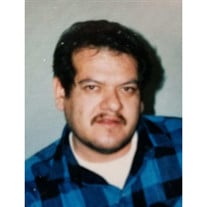 Marco A. Ruiz\r\n\r\n1953 - 2018\r\n\r\nMarco Antonio Ruiz "Tony - Baloney", beloved brother, father and uncle, passed away peacefully in his sleep on Friday, January 19, 2018 in Salt Lake City, Utah. Tony was born December 18, 1953 in Santa Bárbara, Chihuahua, Mexico to Moises and Soledad Ruiz.\r\n\r\nTony was a Roofer by trade and loved his family very much. He also loved joking around with his many nieces and nephews and giving them a hard time. He enjoyed having meals with Anna and his brother Raul. He was friends with everyone. He was known to bring people over for meals to his mother\'s house that he just met. Strangers to him were just friends he hadn\'t met yet. Tony missed and loved his parents dearly whom he helped take care of in their last year\'s. He was a Club 76 original. He will be greatly missed by all his of his brothers, sisters, family and friends. Especially his brother Raul who were inseparable. \r\n\r\nTony is survived by his children Marco Antonio Varela, Elizabeth Varela and Trista (Sarah) Trujillo, his lifelong friend Anna Benavidez, his grandchildren Moses, Emilia, Donovan and Roman, his sisters Elsa, Luz Elena (Martin), Magda (Federico), Marta (Lupe), his brothers Moises (Juanita), Raul, Victor (Liz), Cesar, Ruben (Ana) and Mario (Ligia), 23 nieces & nephews and many more great-nieces and great-nephews. He is preceded in death by his parents Moises and Soledad Ruiz. \r\n\r\nA viewing will be held at Our Lady of Guadalupe 157 North 700 West, Salt Lake City, Utah), Thursday, January 25, 2018 from 6:00 to 8:00 PM. A funeral mass will be celebrated Friday, January 26, 2018 also at Our Lady of Guadalupe at 6 pm. Funeral Directors, Neil O'Donnell and Sons.

The family of Marco Antonio Ruiz created this Life Tributes page to make it easy to share your memories.

Send flowers to the Ruiz family.