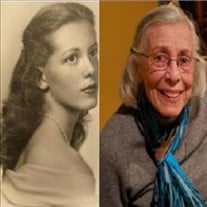 M.A. passed away December 5th peacefully with Gleed and Mary at her side. At the end of May, we moved her into Legacy Village of Sugarhouse where she enjoyed the care and amenities of senior living. By then, she had experienced numerous falls and declining memory. It only took one more fall there that required a trip to the emergency room, where after 3 days, we learned she would require skilled nursing. Fortunately, we found a bed for her at St. Joseph's Villa and she moved to a room just down the hall from her son Guy. She spent much time with Guy in his room and the rest of the family made frequent visits to see them both. When guy died at the end of October she declined more quickly becoming quite weak with a worsening memory. To all of those people including staffs at St. Joseph, Legacy Village, Encompass Home Health and Inspiration Home Health & Hospice, enormous credit and thanks are due. Finally, big thanks to my mother's doctors, Dr. Scott Hacking and Dr. Kate Wilson. Mom was born in Charlotte, North Carolina on December 29, 1928 to John Franklin Chapman and Martha Ann Corbitt. At age 5 M.A. lost her father from a tragic drowning accident in Chesapeake Bay, with three young children to raise, her mother moved the family to Chapel Hill where she earned her Masters Degree in 1937. During the summer, while her mother was in school, the children stayed with their grandparents at their farm on Chesapeake Bay. She remembers missing her mother greatly. The family returned to Charlotte in 1939 and mom remembers their home full of love, laughter and always open to others. In 1946 her mother moved to Salt Lake with M.A. and her sister Lee to marry Gleed Miller. Gleeds daughter, Zane welcomed M.A. to Log Haven, their home, in Millcreek Canyon. She shared her bedroom and they become lifelong friends. In the following three years she attended Southern Seminary in Virginia finishing with an associates degree. She was forever grateful to Gleed, her stepfather for that opportunity. In her final year at Southern Seminary, she was voted, "Most Attractive Campus Coed". She also was a member of the track and basketball teams. During her time in Salt Lake, away from school, she met and fell in love with Guy Toombes Jr. (Tony). He was a student at Cornell University, following his fathers footsteps in the Hospitality and Hotel Industry. Guy senior was, at that time, was the manager of the Hotel Utah. Shortly after their graduations, they married on July 9, 1949 at St. Marks Cathedral. Their reception was the first ever held at Log Haven. They moved to Chicago to pursue Tony's career and then LA., San Francisco, and Portland only to return to Salt Lake City to settle and raise their two boys. Golf became their primary form of entertainment followed by skiing, tennis, and other outdoor activities. They became charter members of Willow Creek and later traded to Hidden Valley where M.A. excelled playing on the ladies golf team for years. She worked for the University of Utah for almost 30 years in University Relations as a Publications Editor. She loved her job and often commented on how much she missed it. It was clear her colleagues had a great deal of confidence and trust in her work. She regularly updated the general catalogue which no one wanted to do and was often brought work from other departments for her critique and review. Much later we learned from her that she had difficulty enjoying novels or general literature because she was too quick to proofread it. M.A. loved socializing with friends and family, was a member of Town Club where she enjoyed playing bridge and being with the ladies. She had season tickets to the Ballet and Symphony. She loved to travel. Trips included an Asian cruise with her dear friend Bonnie, Thailand with Yvette, Guy and Gleed, and Ireland. A painting school in France and Italy took her there several times. She traveled to Florida multiple times for Mary's family reunions where she was adopted, adored and loved. At 89 she cruised the Danube with her boy Gleed. They started in Prague and finished in Budapest. As an artist her forte was watercolor, often using locations where she had traveled as subjects for her work. She was her worst critic but recently while looking at some of her work, she said, "I didn't give myself enough credit." Martha Ann is survived by her son Gleed Toombes, Mary OConnell, his wife, Yvette Toombes her stepsister Zane, nieces, nephews, friends, and Beau her bird. She was preceded in death by her parents, Stepfather Gleed Miller, brother John Franklin, sister Lee Morris, husband Guy Ralph Toombes Jr, son Guy Toombes III. MA donated to a variety of good causes, in lieu of flowers please donate to your favorite causes. Memorial Service will be offered at St. Mark's Cathedral 231 East 100 South Salt Lake City, Utah 84111 at 1:00pm on Wednesday, December 15, 2021. A Celebration of Life will follow the service at 3:00pm a the Marriott University Park located at 480 Wakara Way, Salt Lake City, Utah. Visit www.neilodonnellfh.com for those wishing to leave online tribute and for updates to any schedule changes.

M.A. passed away December 5th peacefully with Gleed and Mary at her side. At the end of May, we moved her into Legacy Village of Sugarhouse where she enjoyed the care and amenities of senior living. By then, she had experienced numerous falls... View Obituary & Service Information

The family of Martha Ann Toombes created this Life Tributes page to make it easy to share your memories.

M.A. passed away December 5th peacefully with Gleed and Mary...

Send flowers to the Toombes family.