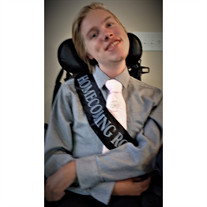 Our sweet Noah Roberts, age 19, passed away peacefully on January 15th, 2019.\r\n\r\nBorn November 16th, 1999, in Salt Lake City to Corey and Leisha Gould Roberts. \r\n\r\nNoah attended West High School and was set to graduate later this year with his cousin Lexi and the rest of the Class of 2019. He loved football and wanted to be a part of the team at West. He was the football manager this season and loved it. Coach Justin Thompson really made Noah feel like he was a part of the team. Noah also ran for homecoming king this year. He was first runner-up and made homecoming royalty. Noah made a lot of friends at West and attended the school with four cousins as well. \r\n\r\nNoah could talk to anyone about football and stats. He loved the Arizona Cardinals, and never liked to hear anyone talk negatively about his team. He saw his Cardinals play in person in 2016 when they beat the Washington Redskins. \r\n\r\nNoah loved when his cousins or anyone else would take him fishing. He was a fish enthusiast. He had an 80-gallon tank with 27 fish and he knew all of them. He liked to research everything about fish and took great care of his tank. \r\n\r\nNoah had Duchenne Muscular Dystrophy, but he never let the cruel and debilitating disease define him. He lived to the fullest and inspired people with his collection of inspirational quotes and by living in the moment. Noah was outspoken and opinionated and had a charming and mischievous smile. He also had a kind heart and soul and didn't like for other people to feel bad.  \r\n\r\nNoah is survived by his mom, Leisha Roberts, his sister Isabel Roberts, many grandparents, aunts, uncles and many close cousins including Trevin. He was preceded in death by his father Corey, brother Drew, his nana Monica Ruth Roberts and grandpas Donald Westerman and Mark Gould. \r\n\r\nWe will all miss Noah dearly but are comforted knowing he is with his brother Drew and father Corey, walking and running free. Drew and Noah were inseparable and shared many wild and fun times with their group of friends.  \r\n\r\nA Celebration of Life will be held Monday, January 21st from 2 p.m.-4 p.m. at Neil O'Donnell and Sons Mortuary, 372 East 100 South in Salt Lake City.

The family of Noah Roberts created this Life Tributes page to make it easy to share your memories.

Our sweet Noah Roberts, age 19, passed away peacefully on January...

Send flowers to the Roberts family.