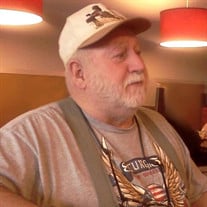 Paul Kuhn, “Pops”, age 83, passed away on Saturday, November 21, 2020, in his home in Salt Lake City Utah. Paul was born on May 14th, 1937, in Salt Lake City to his mother Frieda Buble and father Fred Kuhn. He married Karol Sanchez, 1959 in Elko, NV. He lived a full life, filled with adventures, hard work, and endless stories of how much fun he had growing up, causing a little trouble along the way. Paul took joy in the simple things in life, he was very humble and had a contagious laugh. Paul was always the first person there for special occasions and loved to help people. Paul developed his hard-working ethic from his father and was a proud member of the Utah Sheet Metal Union. He was the handiest of handymen and could fix or invent anything you could imagine. He was the quintessential guy that if he couldn't help, he knew a guy who could. His great work ethic came from his father. He worked on many important projects and buildings both in and out of the state of Utah, a proud member of the Utah Sheet Metal Workers Union. Paul continued tinkering and cussing until his final day. He loved to spend his free time with his family, hunting, fishing, gardening, working on his vast collection of cars, in addition to creating his beautiful award-winning copper flowers. His many talents were only surpassed by his love of both his family and his dogs. Paul always worked with a loyal dog by his side, his love for dogs was evident by the way his dogs loved him back. He could usually be seen driving around town with his furry companion in tow, sitting on his truck’s center console. He was an incredible man who touched the hearts of many and will be greatly missed by all who knew him. Survived by his son Paul Kuhn jr. and wife Debbera; son Mark Kuhn, grandchildren; Karrie, Annie, Maddison, Richard, Kaitlin, and Carly, his siblings Fred Kuhn jr. and Joan O’Bray. The world was a better place with him in it. They just don’t make them like him anymore.

The family of Paul Kuhn created this Life Tributes page to make it easy to share your memories.

Send flowers to the Kuhn family.