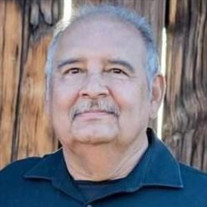 Randy Gilbert Archuleta, 70, died of natural causes in Salt Lake City, Utah on November 14, 2020 surrounded by his sisters. Randy was born August 8, 1950 to Raymond and Regina (Valdez) Archuleta in Salt Lake City Utah. Randy married Celia Anne Maness in Salt Lake City Utah May 1982, they divorced in 2016 but remained close. He was a graduate of West High School and had some college courses. Over his lifetime he worked in many different occupations including hotel management and for Sperry Univac, but the job he loved and was most accomplished in was working with Low Income Housing Tax Credit (LIHTC) program through state agencies in Utah, Nebraska, and Arizona. He was revered as one of the best in the LIHTC world helping create housing for low-income families. During his tenure in LIHTC, Randy won several awards of excellence for his dedication to the program. Randy had a ready smile and really enjoyed spending time with his family. He was always ready to go to discover what yet another state had to offer. Camping each summer in Lava Hot Springs Idaho with family and friends was a must. In social gatherings, Randy would invariably end up being the grill master or the bartender. He was a member of the Catholic Church. Randy is survived by former spouse, Celia Anne Maness, son Randy Alexander Archuleta, daughter Brook Anne (Glenn) Koester, granddaughters Riannan Rose Swallow and Ember Elisabeth Archuleta, step grandchildren Houston Koester and Amanda White, step great grandson Braxton Beck, sisters Sandra (Tony) Archuleta and Debbie (Tony) Gallegos, niece Ramona (Troy) Ashbaker, nephew Rigo Archuleta, nephew Gilbert Archuleta, niece Genie Archuleta, and many grand nieces and nephews. He is predeceased by his father, Raymond Archuleta, his mother, Regina Archuleta, and his brother, Larry Archuleta. A vigil service will be held Monday, November 23, 2020 at 7:00 PM at Neil O'Donnell Funeral Home, 372 East 100 South, where friends may call from 6:00 - 8:00 PM. A funeral mass will be celebrated Tuesday, November 24, 2020 at 12:30 PM at the Cathedral of the Madeleine, 331 East South Temple. Due to current COVID guidelines, attendance is strictly limited. He will be buried in Salt Lake City Cemetery in Salt Lake City.

The family of Randy Gilbert Archuleta created this Life Tributes page to make it easy to share your memories.

Send flowers to the Archuleta family.