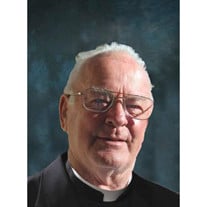 Reverend John Brendan Hart, prominent Utah Catholic pastor and military chaplain, died July 27, 2018, following a long illness. A native of Clonakilty, County Cork, Ireland he was born May 10, 1935 to Daniel and Margaret Foley Hart. Following his theological education at Saint Patrick College, Thurles, he was ordained to the priesthood June 12, 1960 in the Thurles Cathedral. On September 2, 1960, Father Hart arrived in the missionary Diocese of Salt Lake City, where he had promised to serve.\r\n\r\nFather Hart served in a variety of assignments where he dedicated himself tirelessly to the pastoral care of the communities. As associate pastor, he served at Saint Joseph Parish, Ogden, Notre Dame de Lourdes, Price, and the Cathedral of the Madeleine. He generously accepted temporary assignments as pastor in Moab, Copperton and Park City.\r\n\r\nIn 1972, Father Hart joined the Naval Reserve Corps and two years later entered the Utah National Guard, providing Catholic chaplaincy for the Military Reserves. In 1975, he became pastor of Saint Francis Xavier Parish, Kearns where he remained five years and then was two years as pastor of Our Lady of Lourdes Parish, Salt Lake City. In 1982, Father Hart entered active duty as a hospital chaplain at Fort Lewis, Washington, followed by military assignments in Germany.\r\n\r\nReturning to the diocese in 1987, he was named pastor of Saint Joseph the Worker in West Jordan and three years later was released to serve as a chaplain in the Persian Gulf with the 144th Evacuation Hospital Unit during "Operation Desert Storm".   He was promoted to the rank of Lieutenant Colonel.\r\n\r\nFollowing that service he returned to Saint Joseph the Worker Parish where he remained until 1999. Following that, Father served as chaplain at Christus Saint Joseph Villa, for the Carmelite Nuns, as pastor of Saint Christopher Parish, Kanab and temporarily at Holy Family Parish, Ogden. Father John Hart retired August 1, 2006 and resided in Salt Lake City.\r\n\r\nFather Hart made life-long friends in every pastoral assignment and will be remembered for his personal generosity to help those in need, his hearty laugh, smile and love of Irish folklore. He was one of ten children and is survived by his sisters Mary Whooley and Frances Byrne, both residing in Ireland.\r\n\r\nThe Funeral Vigil will be celebrated at the Cathedral on Thursday evening, August 2, 2018 with visitation from 7:00 to 8:30 p.m. The Vigil will be celebrated at 8:00 p.m. The Mass of Christian Burial will be on Friday, August 3, at 11:00 a.m. at the Cathedral 131 East South Temple Street). His final resting place will be alongside his parents in Clonakitty, County Cork, Ireland. Funeral arrangements handled through Neil O'Donnell & Sons Mortuary.  In lieu of flowers, donations may be made to the Priests Mutual Benefit Society 17 C Street, Salt Lake City, UT 84103).

The family of Reverend Brendan Hart created this Life Tributes page to make it easy to share your memories.

Send flowers to the Hart family.