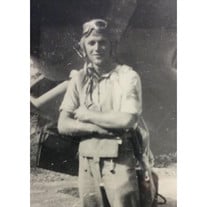 MSGT US Marine Corp (Retired)\r\n \r\nBorn 10-4-1921 And lived every minute to 5-30-2017\r\n \r\nHe was born in Salt Lake City to Lula Morrison Barr and Parley Barr, and lived, well, everywhere and in a whole lot of nowheres. He died at home in Salt Lake exactly as he wanted to. The cause of death was he just wore out his body after over 95 years , a lot of it spent doing things most of us can't even imagine, and he never complained or bragged about it he just did it for all of us.\r\n \r\nOur DAD finally passed. He died at the end of a good day, and a good week. A few minutes before he died he had just kissed two of his great grandchildren good night, laughed at a new picture of one of his other great grandkids and said good night to Jane and I . He often quoted his sister, Roma, and said he wasn't afraid to die, only of living too long. We would have loved to have him longer, but he was ready to go.\r\nThe Salt Lake newspapers are no longer thick enough to carry all the details of his life ( I know because I am one of the last dozen subscribers)  But I'll do a rough sketch. He attended Holllywood High with Mickey Rooney and Judy Garland, during the depression. The family moved back to Richfield, Utah where he graduated from Richfield High. He lied about his age and at age 17  enlisted in the US Marines after already becoming a pilot. He went to Portland Oregon and got his technical training in aeronautics. He received an appointment to Annapolis through the officers training program in the Marines and was set to attend the USNA  when Pearl Harbor was attacked, they needed pilots worse than officers and off he went. Somewhere in the next few years he met and married  Mildred Sanderson while training other pilots in Jacksonville, Florida. One of his trainees later on was a guy named John Glenn, Dad said he was pretty good. Subsequently Sharon my sister  was born and I came along 7 years later. Dad was busy in the South Pacific, China, Korea and even delivering planes into Vietnam for the French for over 22 Years in the Marines. Our mother and he divorced while we were stationed in Hawaii. He had custody of us and felt he had to retire from The Marines and move back to where he had family in SLC and take a less dangerous job with more predictable hours to raise us. He owned a small business for a while and when his sister Enid's husband Walter died tragically well before his time  he went to work in their families banking business.  Here he went from warrior to banker, where he was equally focused and successful. After Sharon was grown and I was about to graduate and go off to college Dad decided he could date again and married the first girl he did date. A friend of his best friend Glen Groo\'s wife. Her name was Robyn McKendrick and they were both smitten. She had a young son Robb( are you sensing a theme here) and he married her and adopted Robb. Dad was an avid Pilot, a great and prolific (some might say obsessive) golfer and a lover of all sports. He would watch the national tiddly winks tournament if it was on Wide World of Sports. But to those who knew him best he was a great friend, Husband and to his three children mostly a DAD.\r\nHe is survived by his three children Sharon Coombs, Bob (Jane)Barr and Robb( Paul) Barr.  Five Grandchildren, JJ, Ronalie, Nathan, Danielle and Natalie.(I'm not forgetting their spouses, Partners And "FRIENDS" it's just too complicated.) And five great grandchildren ( We focus on quality not quantity) Keira, Jaxson, Quinn, Connor and Brynn. and his Half-sister Dorothy Boyack of Idaho. He is also survived by many beloved Nieces and Nephews.\r\nAs he was 95 the \" preceded by"  list is again longer than the ability of the newspaper to publish. But some ( not all) of the notable ones are His wife Robyn and Sharon and Bob\'s Mother Mildred, all five of his siblings Theda, Josiah, Roma, Enid and Bill, and  all of their spouses as well. A grandson Joshua, and his Son in Law Jimmy Dean Coombs\r\n \r\nA funeral mass will be held at St Ambrose Catholic church at a date we will announce later. Somewhere in the last two weeks of June. In a turn of events that could only happen to the Barr's  we had to put off the scheduling a bit and Dad was slightly inconsiderate in choosing to die exactly when he did. But we know the best part of him is now with the loved ones who preceded him. And he is in no hurry to deal with   the rest.\r\n \r\nFor those of you that think this obituary might be a bit unsophisticated that's what you get for leaving me in charge.\r\nBut DAD would get a guilty pleasure from it ( and then give me a dirty look)\r\n \r\nRest in Peace Dad, if anyone ever deserved it you do

MSGT US Marine Corp (Retired)\r\n \r\nBorn 10-4-1921 And lived every minute to 5-30-2017\r\n \r\nHe was born in Salt Lake City to Lula Morrison Barr and Parley Barr, and lived, well, everywhere and in a whole lot of nowheres. He died at home... View Obituary & Service Information

The family of Robert Morrison Barr created this Life Tributes page to make it easy to share your memories.

Send flowers to the Barr family.