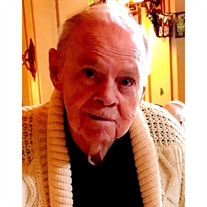 Robert Glen Neville Sr.\r\n"Bob"\r\n \r\n\r\nBob passed away at St. Marks Hospital surrounded by his loving family on December 29, 2017.  He was born March 21, 1928 at Holy Cross Hospital in Salt Lake City, UT. to John J. and Jane Loretta Neville. He was the youngest of seven children. He attended Judge Memorial Catholic High School where he participated on the football and basketball teams. His family moved to Laguna Beach, California where Bob worked as the head Lifeguard along the Laguna Beach ocean front.\r\n\r\n \r\n\r\nHe joined the US Army at the age of 17 where he was assigned to the 82nd Airborne and was a paratrooper through the end of World War II.\r\n\r\nHe returned to Salt Lake City where he met the love of his life, Rosalie Viox. Together, they raised seven children. Their marriage endured nearly 65 years. Bob worked as an Insurance agent and developed many lasting friendships. He was very involved in fundraising for Saint Ambrose Catholic Church and Judge Memorial High School.\r\n\r\n \r\n\r\nBob was very proud of his Irish Heritage and was a founding member of the Hibernian Society of Utah. He participated in the organization of Salt Lake City's Saint Patrick's Day Parade for decades. He loved to attend sporting events, especially those in which one of his 11 Grandchildren participated. He loved Utah football and the San Francisco 49ers.\r\n\r\n \r\n\r\nHis greatest joy and biggest source of inspiration was his family. He beamed with pride whenever he spoke of the Neville clan. This was not limited to his sons and daughters...it included every niece, nephew, cousin, aunt, uncle and friend. If you had a story, He\'d love to hear it. If he was telling one you would listen and laugh. His laughter would fill a room and his enthusiasm for a good joke was contagious.\r\n\r\n \r\n\r\nEveryone loved \"Uncle Bob\" and admired his dedication to his family and especially his commitment to our Mother, Rosalie.\r\n\r\n \r\n\r\nBob is survived by Rosalie, his wife of 64 years, children Robert Jr. (Susan), Loretta McConnor (Sean), Greg (Sandi), Jane Larson (Jim), Chris (Heather) and Mike (Donette).\r\n\r\n \r\n\r\nPreceded in death by daughter Rosalie, sister Noramary, and brothers Charlie, Bill, Jim, Doug and John.\r\n\r\n \r\n\r\nA vigil will be held Friday January 5th at 7:00pm at Neil O\'Donnell & Sons Mortuary 372 East 100 South, where friends may call from 6:00-7:00 p.m. A Funeral Mass will be celebrated Saturday, January 6th at 10:00 am at Saint Ambrose Catholic Church 1975 South 2300 East, where friends may call one hour prior to mass. Funeral Director\'s Neil O\'Donnell & Sons.\r\n\r\nIn lieu of flowers, please consider donating to Saint Ambrose Catholic Church or Judge Memorial Catholic High School.\r\n\r\nFair thee well Dad, we will miss you.

The family of Robert Glen Neville created this Life Tributes page to make it easy to share your memories.

Send flowers to the Neville family.