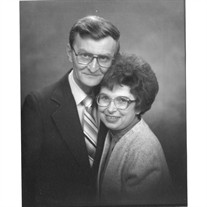 Ronald Patrick Sine, Sr.\r\n1934 - 2016\r\nRonald Patrick Sine, Sr., beloved husband, father, grandfather, and great grandfather, passed away Friday, October 14, 2016 peacefully at his home. He was born May 16, 1934 to Joseph F. and Frieda L. (Holman) Sine. He married Patricia Ann Brophy in 1952. He is survived by his wife, Patricia, and children: Pamela Birt (daughter), Cynthia Gomer (daughter), Ronald Sine, Jr., (son), Victoria Millward (daughter), and Rebecca Ruocco (daughter). Preceded in death by his son Douglas Sine. He is a 4-year Air Force Veteran where he worked on B52 bombers as a radar technician. After military service he worked as the Technical Director for Cardiology Services at the University of Utah for over 20 years. He continually amused his family with his quick wit and humorous invention of words.\r\nA funeral mass will be celebrated Wednesday, Oct. 19th, at 12:00 noon at Saint Ann Catholic Church, 450 East 2100 South. A vigil service will be held Tuesday, Oct. 18 at 7:00 p.m. also at the church where friends may call from 6:00 - 7:00 p.m. Committal, Mt. Calvary Catholic Cemetery, 4th Avenue and T Street. Funeral directors, Neil O'Donnell and Sons.\r\nIn lieu of flowers, the family requests donation be made to St. Ann's Catholic School, 430 East 2100 South, SLC, UT. 84115. The family would like to thank the VA Hospital and Brighton Hospice for the care they provided him.

The family of Ronald Patrick Sine, created this Life Tributes page to make it easy to share your memories.

Send flowers to the Sine, family.