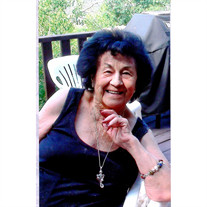 \r\n"Nana"\r\nRose Yenzi Furano passed away on March 14, 2016, surrounded by her loving family. Rose "Nana" was born June 4, 1925 in Helper, Utah to Ralph and Frances Felice Yenzi. She came to Salt Lake City at the young age of 16 and met Pietro Furano and they immediately fell in love. They were married while he was home on leave from the Navy and their marriage lasted 69 years until Pete "Nanu" passed away in 2013. She attended Stevens Henager Business School and worked for Kennecott and the State of Utah until she and Nanu retired. They loved to fish on the weekends, starting with a camper, then a trailer, after which they built "the Cabin" where they spent every summer after their retirement. Betty Boop was one of her favorite characters and they even named one of their boats Betty Boop. Her favorite pastimes were crocheting, watching Walker Texas Ranger, Matlock, and the Utah Jazz. When she married Nanu she was not much of a cook but learned to cook from Nanu's father who was a chef. Through the years all the holidays were full of traditional Italian specialties. There was spaghetti omelets at Easter, baccala at Christmas, and many Italian sweets, and then there was her bread. Everyone loved her bread.\r\n\r\nShe is survived by her daughter, Carreen (Justin), sons, Antonio (Charlene) and Dino (Robyn), eight grandchildren, nine great grandchildren, and many nieces and nephews.\r\n\r\nShe was preceded in death by her parents, Frances and Ralph, sister, Christina, and an infant brother.\r\n\r\nA funeral mass will be celebrated Friday, March 18, 2016 at 11:00 a.m. at Saint Ann Catholic Church, 450 East 2100 South.. A vigil service will be held Thursday, March 17, 2016 at 7:00 p.m. also at the church, where friends may call from 6:00 - 7:00 p.m. Committal, Mt. Calvary Catholic Cemetery, 4th Avenue and T Street. Funeral directors, Neil O\'Donnell and Sons.\r\n\r\nIn lieu of flowers, donations may be made to the Saint Ann School scholarship fund, c/o Saint Ann Church, 2119 South 400 East, SLC, UT 84115.\r\n\r\nThe family would like to thank the many caregivers for their loving care of our mom.\r\n\r\n

\r\n"Nana"\r\nRose Yenzi Furano passed away on March 14, 2016, surrounded by her loving family. Rose "Nana" was born June 4, 1925 in Helper, Utah to Ralph and Frances Felice Yenzi. She came to Salt Lake City at the young age of 16 and met Pietro... View Obituary & Service Information

The family of Rose Y. Furano created this Life Tributes page to make it easy to share your memories.

Send flowers to the Furano family.