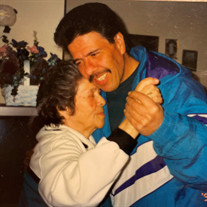 Ruben Darrell Vialpando , from Salt Lake City, Utah passed away on November 8, 2021 at Intermountain Medical Center after a long struggle with CopD and diabetes. He was born on December 21, 1954, at Salt Lake County General Hospital, the son of Eva Vialpando (Maez) and Alfred Abdullah Hasna. In Rubens early life he attended South High and later served in the US Navy from 1973-1976 during the Vietnam War. After the Navy Ruben had 3 beautiful daughters before marrying Vera Waterman on September 28, 1984, and together they had 3 children. Ruben and Vera did divorce in 2000 but stayed friends throughout the rest of his life. Ruben was Catholic who enjoyed church and held those values close to him in his day-to-day life. He had many interests and passions including classic cars, Sci-Fi (especially Star Trek) auto mechanics, and rare antiques. Ruben was a good dad and an amazing grandfather. Ruben was so loved by his family, each person that knew him had their own special connection and each relationship was unique. Rubens day to day before the pandemic, was spent with family, there didn’t have to be a special occasion for being together, he just loved the company. His family always knew where they could find him, whether it was at 7-11 getting his Diet Coke and newspaper or St. Ann’s parking lot with a cup of coffee just taking some time for himself. Ruben was loved by many and his passing has left a huge hole in his family that will never be filled. We can all find some peace knowing he’s getting to dance with Grandma Eva again. He was a loving and genuine hearted father, brother, uncle, and grandpa. He will be incredibly missed. Ruben is survived by his daughters- Clarita Jean Inman, and Rachel Evangelina Mua. His sons-Adam Ruben Vialpando (Lindsay Vialpando) and Dayne Anthony Gilbert Vialpando. Ruben’s grandchildren he was so proud of from oldest to youngest: Samantha, Gwen, Frankie, Mark and Evangelina. His sisters Gloria, Lisa, Terri and Ranee. His brothers Ted and Mike. Ruben also had many nieces and nephews. Ruben is proceeded in death by his mother-Evangelina Vialpando (Maez), father-Alfred Abdullah Hasna, brothers: David Vialpondo, Gilbert Vialpondo, Joe Vialpondo, and Raymond Vialpondo, two sisters: Linda Vialpando and MaryAnne Vialpando, niece: Sherina Gooden and nephew:-Timothy Herrera, and Grandniece: Lorica Gooden. Viewing will be held on November 16, 2021, at 6:00pm-8:00pm at Neil O’Donnell Funeral Home 372 E. 100 S. Salt Lake City, UT 84111. A Funeral Mass will be celebrated on November 17, 2021, at 12:00pm at St Anne’s Catholic Church 450 East 2100 South. Salt Lake City, UT 84115

Ruben Darrell Vialpando , from Salt Lake City, Utah passed away on November 8, 2021 at Intermountain Medical Center after a long struggle with CopD and diabetes. He was born on December 21, 1954, at Salt Lake County General Hospital, the... View Obituary & Service Information

The family of Ruben Darrell Vialpando created this Life Tributes page to make it easy to share your memories.

Send flowers to the Vialpando family.