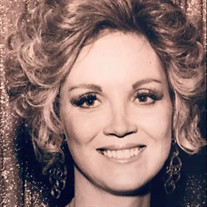 Sandra (Sandy) D. Wyatt, aged 77, died November 10, 2020 in Las Vegas, Nevada. She was born Sandra Delilah Heath on November 20, 1942 at Holy Cross Hospital in Salt Lake City, Utah, to William F. Heath and Bertha Bateman Heath. Sandy’s early years were spent growing up in a post-WWII era filled with hope and promise. She was raised in a quaint house in a peaceful neighborhood on Hannibal Street in Sugarhouse, Utah. As a young child, she began taking dance lessons and developed into a talented and accomplished jazz and tap dancer, performing in local community and school programs well into her teens. She attended and graduated from South High School on June 1, 1961. As a cheerleader, she met and fell in love with a member of the football team. She married Theron Gregg on August 5, 1961. Sandy and Theron lived and worked at Alta Ski Resort in Utah, where they conceived their only child together, son Joey Gregg, who was born in August of 1962. Sadly, by September of 1965, Sandy and Theron divorced. Sandy then moved onto the property of the Heathcliff Motel in Salt Lake City that was owned and operated by her parents, Bill and Bertie and her grandmother Delilah Holt Heath. Sandy began professional modeling work that led to her employment at a local tavern named Grogan’s, becoming the first “Go-Go Girl” in Utah, and essentially the West, following the famous footsteps of her friend, Carol Doda. In early 1968, Sandy met “Hippie musician” and chef, Doug Wyatt. Sandy and Doug were married on June 17, 1968. Doug then adopted Sandy’s son, Joey, officially changing his name to Wyatt. Being the height of the Vietnam War, Doug was drafted into the US Marine Corps. Suddenly, Sandy became a Marine’s wife, transforming her dancing to the beat of a military life, jumping and landing and jumping again, from Virginia to Texas, Alabama to California, and North Carolina. While in Texas, Sandy and Doug gave birth to their daughter, Heather Jane Wyatt in October of 1970. Near the end of 1971, Doug served a year’s tour in Vietnam as a helicopter pilot, leaving Sandy to raise her children alone. After Doug’s return from the War, Sandy and Doug marched on until March 25, 1976 when they divorced. Thus began Sandy’s life of tapping down the Yellow Brick Road in search of the Emerald City. Sandy loved to party! Drinking, smoking, and dancing from dusk to dawn, like a whirling dervish. Working as a cocktail waitress, she met and tangoed with Beach Boy Dennis Wilson, Hollywood actors Richard Jaeckel and Jim Hutton, and ink magnate, Bob Gans. Eventually, she fell in love with jazz drummer, Joe Fazzi, formerly of the well-known 50’s jazz combo, The Millionaires. She and Joe married on January 11, 1979. They remained together until his death in 2001. In the 80’s, Sandy began taking classes at Utah Technical College. She graduated as a Licensed Practical Nurse on March 16, 1984. She worked at several medical facilities in Salt Lake City before moving to the Emerald City, AKA “Vegas, Baby!” Sandy became the “Queen of Oz-Vegas,” sidestepping her way under the Strip’s neon lights to the music of Dean Martin, Frank Sinatra, and Elvis. Slot machines, bingo cards, cocktails, and cigarettes became her dancing companions. She had one final nursing job, while in Las Vegas at the Clark County Detention Center, where she made headlines. After sticking up for a mistreated prisoner that she was assigned to, she reported the horrible conditions to the authorities. She was terminated for speaking out, but was vindicated when the Las Vegas Bullet titled her “the hero nurse.” Sandy was a member of the Church of Jesus Christ of Latter Day Saints. Although she was not an active member, she was religious at heart. She was well-versed in the subject of all religions, and her beliefs encompassed a cocktail mix of Mormonism, popular doomsday prophecy, UFO’s and Astrology. Sandy was a staunch member of the Republican Party (Yeah, you read that right!). Also, she was a lifetime member of the Ladies Auxiliary to the Veterans’ of Foreign Wars. “Sandy Gregg Wyatt Fazzi” was a unique and dramatic composition. She was Judy Garland, Jill St. John, Florence Nightingale, and Jane Fonda all rolled into one Big Bingo Ball. She will be missed by everyone who knew her. Sandy landed her last dance step and took her final applause at 7:20 PM, Tuesday, November 10, 2020, Somewhere over the Rainbow. Sandy is preceded in death by her parents, William F. Heath and Bertha Bateman Heath; her brother, William Frank Heath, Jr.; ex-husbands, Theron Gregg and Joe Fazzi. She is survived by her children, son Joey Wyatt Gregg (wife Brooke), and daughter Heather Jane Wyatt (husband Tom Baird); her brother, John Heath; sister-in-law Maryann Heath Keller; ex-husband Doug Wyatt; her nieces, Melissa Fisher, Amy Baxter, Holly Iverson, and Monet Heath; and nephews Billy Heath, Max Heath, and Roman Heath. A public viewing will be held at Neil O'Donnell Funeral Home, 372 E 100 S, Salt Lake City, UT 84111, on Monday, November 23, 2020 from 12:30 PM until 1:30 PM. A graveside service will follow at Mount Olivet Cemetery, 1342 E 500 S, Salt Lake City, UT 84102 at 2:00 PM the same day. Masks are required at both venues.

The family of Sandra Delilah Wyatt created this Life Tributes page to make it easy to share your memories.

Send flowers to the Wyatt family.