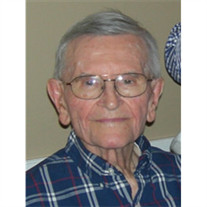 February 3, 1928-March 14, 2019\r\nOn March 14, after a short illness but long life, God called Theodore "Teddy," "Ted," "Dad," "Dziadzi" (Polish for Grandfather and pronounced "Jah-Jee") and "Wujciu" (Polish for Uncle and pronounced "Voy-Choo") home to be with his Dad, Mom, Brother and all who had gone before him. Loved by his family and friends, he will be missed but we know that ultimately, we will be with him again.\r\nTed was born on February 3, 1928 to Sophie and Frank Sudol in Passaic, New Jersey. He learned to be an independent person, as many of the values and ethics he developed were as a result of growing up during the time of the Depression and World War II. He was a great big brother to Raymond, who was almost seven years his junior. Teddy graduated from Patterson Central High School in 1946 and enrolled in the International Brotherhood of Electrical Workers (IBEW) apprenticeship program, following in the tradition of his Dad, then later his brother. His standard joke was that IBEW really stood for "I Believe in Easy Work". Later, in 1950, he was called up to serve his country for two years during the Korean war, serving in the Signal Corps in Europe during the Cold War.\r\nIn 1955 he married his sweetheart Mary Jaworski, a young immigrant from Poland who had come to the United States just five years earlier. They built their home that would be their residence of 40 ­­years, in Paramus, New Jersey. They were married for over 63 years. Together they raised two children, Teresa and Christopher. In addition to the children, they also took in and cared for Mary's mother during those 40 years after Mary's father suddenly passed away in 1956.\r\nTeddy was passionate about his talents, hobbies and interests. From his earliest days during his time in the military, to the end of his life he maintained a love for photography. He was a member of various photography clubs, prior to and after his retirement. Teddy received many awards and ribbons for his 35 millimeter, then later digital photographs of scenery and nature. Another passion he nurtured was his love of radio control airplanes and helicopters. He began as a young boy in the 1930's flying his "U-Control" tethered planes, then later in life spend countless hours building aircraft, working on detailed electronic equipment and flying his final products.\r\nTeddy loved sports, history and travel. During many dinner time discussions, he would reminisce about his beloved Brooklyn Dodgers of the 1940's and 50's, or detailed discussions of American and World history. The knowledge and desire to learn more, transcended to his children and grandchildren. Teddy's trips and travels gave him the chance to continue to learn, as well as capture unique opportunities and add to his photo collection.\r\nTed retired from IBEW Local 164 in 1990, and in 1996 he and Mary retired to Sun City West, Arizona where they made a litany of friends. Together they developed bonds through local organizations, church groups and activities, of which participating on their "Bocci Ball" team was their favorite.\r\nAlways willing to help throughout his life, it was not uncommon to see him assisting people with service for friends and family on various projects. To the very end, when it was difficult to complete the physical tasks, he still maintained the sharp ability to lend his knowledge in the areas of electrical, automotive or mechanical projects. One constant was that if there was need, there was no hesitation to ask Dziadzi for advice or help.\r\nMost of all, he was loved by his family. He will be missed but never forgotten. He is survived by his wife of 64 years, Mary; children, Teresa Catlin (Robert), Christopher Sudol (Susan); grandchildren Christian Sudol (Holly), Madelyn Jensen (Keith), Britain Sudol (Andrea), Morgan, Ethan and Mia; great grandchildren Peyton, Zigmund (Ziggy) and Theodore (Teddy); devoted niece Stefanie (Chris) Mis; as well as countless friends too numerous to mention.\r\nPerhaps Ted's time on this Earth can be summarized by an excerpt from the poem "A Happy Man" by Edwin Arlington Robinson:\r\nWhen these graven lines you see,\r\nTraveler, do not pity me;\r\nThough I be among the dead,\r\nLet no mournful word be said.\r\nChildren that I leave behind,\r\nAnd their children, all were kind;\r\nNear to them and to my wife,\r\nI was happy all my life.\r\nA Memorial Mass will be held in Ted's honor at: 10:00 AM, March 22, 2019, Prince of Peace Roman Catholic Church, 14818 W Deer Valley Dr, Sun City West, AZ 85375.\r\nA Funeral Mass will be celebrated 10:30 a.m. Saturday March 30, 2019 at Blessed Sacrament Catholic Church, 9800 S. 1700 E. Sandy, Utah where friends may call one half hour prior. Viewing/Rosary will be held Friday March 29th at 7:00 p.m., at Blessed Sacrament Church. Interment will be at Larkin Sunset Gardens, 1950 E. Dimple Dell Road, Sandy, Utah.

The family of Theodore Eugene Sudol created this Life Tributes page to make it easy to share your memories.

Send flowers to the Sudol family.