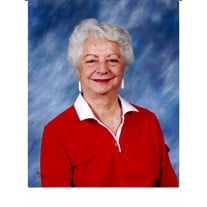 January 8th, 1930 - October 26th 2018\r\n\r\n"No, the journey doesn't end here. Death is just another path. One that we all must take."\r\n\r\nOn Friday, October 26th 2018 our wonderful, beloved, generous mother, grandmother, sister, aunt and great friend passed peacefully on to the next life after a yearlong battle with metastatic lung cancer. It was a fate she easily accepted when she was informed of her unforgiving malady, proclaiming, "Well, I've had a good life."\r\n\r\nVictoria was born on January 8th in Brooklyn New York in the cold winter of 1930 to Italian immigrants. She was the fourth of five children and was preceded in death by two of her brothers. She is survived by one sister, Angelina and one brother, Anthony. Both still reside in New York.\r\n\r\nOn April 25th, 1955 Victoria married Leo Laurence Gandley who preceded her in death in 2005. Their union produced two sons, Leo Thomas of Sandy and John Dominic of Longmont, Colorado. She has one grand-daughter, Gabriella, also of Sandy, Utah.\r\n\r\nA strong woman, Victoria stared down several difficult trials life handed her with grace and aplomb.\r\n\r\nVicki was an active and enthusiastic member of the Catholic church and volunteered in many capacities in the Our Lady of Lourdes parish of which she was a member for more than 36 years.\r\n\r\nVicki loved going on cruises and to Wendover and Las Vegas. She had many friends.\r\n\r\nA Funeral Mass will be celebrated Monday, Nov. 5, 2018 at 11:00 a.m. at Our Lady of Lourdes Catholic Church, 670 South 1100 East. A Vigil service will be held Sunday, Nov. 4, 2018 at 6:00 p.m. at Neil O'Donnell and Sons Mortuary, 372 East 100 South, where friends may call from 5:00 - 6:00 p.m. Committal, Mt. Calvary Catholic Cemetery, 4th Avenue and T Street.\r\n\r\nIn lieu of flowers, Victoria would prefer that charitable contributions be made to Shriner's Hospital or the Make-A-Wish Foundation.\r\n\r\n

The family of Victoria Isabella Gandley created this Life Tributes page to make it easy to share your memories.

Send flowers to the Gandley family.