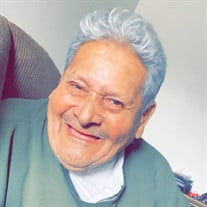 Vincent Velasquez, 87, died on December 10, 2020 of natural causes. He was born on July 14, 1933 in Salt Lake City to Juan and Petre Gonzales Velasquez. He married Ruth E. Sanger in Elko, Nevada on October 3, 1964. She died on June 14, 2002. Vince was a very caring, loving person who would give up the shirt on his back to anyone who needed it. He always thought of others first and put himself at the last for everything. His family meant everything to him. All who knew him will remember him as a kind and loving soul who always made jokes to everyone to put a smile on their face. He enjoyed spending time with his grandchildren and great grandchildren in the mountains far away from the city, relaxing and talking to everyone around him, waiting for the big fish or double fish to hit his line. Then he would holler at one of us to help him so he would not lose his catch. His eyes would light up when he saw the catch on his line. Then he would go home and brag about the fishing trip Love from his family. He is survived by his son, Vince E. Velasquez and step daughter, Jennie Montoya. Sisters, Carmen Corona, Martha, and Maria, several nieces and nephews; grandchildren, Chantel Trujillo, Jose Suarez, Matthew Montoya; and great grandchildren, Nevaeh Galvan, Xylus Montoya, and D’Angelo Trujillo Hernandez Gonzales. He was preceded in death by his mother, Petre Gonzales Velasquez, father, Juan Velasquez, brothers, Joe and Martin Velasquez, and sister, Polly Velasquez. Funeral services will be held Thursday, December 17, 2020 at 1:30 p.m. at Neil O’Donnell Funeral Home, 372 East 100 South, Salt Lake City, where friends may call from 11:00 a.m. to 1:30 p.m. Interment, Mt. Olivet Cemetery, 1342 East 500 South.

The family of Vincent Velasquez created this Life Tributes page to make it easy to share your memories.

Send flowers to the Velasquez family.