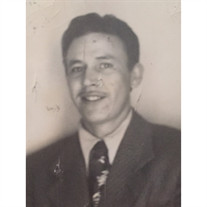 \r\nWaldo Herrera\r\n1929 - 2015\r\n\r\nOur beloved, husband, father, brother, and grandfather died September 18, 2015. Waldo was born April 4, 1929 in Coyote, New Mexico, to Gregorio and Alfreda (Sanchez) Herrera. He grew up in Coyote, NM. Erminda, his neighbor, grew to know and love Waldo. He went back to Coyote in 1954 to get married. Then they moved to Monticello in the Sixties; then moved to Salt Lake and raised their children.\r\n\r\nHe worked various jobs - sheepherder, miner, business painter and a custodian for 7-up/Coke Cola. He served as an Usher at Saint Patrick Parish for many years. He is well known for giving "loli pops" to everyone.\r\n\r\nSurvived by his beloved spouse, Erminda, married for 62 years; and from their union Tony (Christina), Benney (Esther), Rita Stelmach, Gregory, Michael (Jaime) and Maryana (Tino) Valles, as well as many grandchildren and great-grandchildren; and brother, John Herrera.\r\n\r\nViewing will be on Monday, September 21st from 6:00-8:00 p.m. with Holy Rosary to be recited at 7:00 p.m. at Saint Patrick Parish, 1040 W. 400 S., Salt Lake City, Utah. Tuesday, September 22nd at 11:00 a.m. Mass of the Resurrection will be celebrated at Saint Patrick Parish. Committal at Salt Lake City Cemetery, 4th Ave. and N St. Funeral directors, Neil O'Donnell & Sons.\r\n\r\nThank you to Aging Services, Saint Joseph Villa, Tender Care Services and to all priests who administered the sacraments.

The family of Waldo T. Herrera created this Life Tributes page to make it easy to share your memories.

Send flowers to the Herrera family.