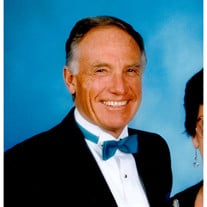 William Blaine Hill\r\nMay 31, 1925 - June 25, 2018\r\n \r\nAlways in a hurry, Blaine "Beanie" Hill decided on June 25, 2018 that it was time to get moving. He just couldn't sit still any longer. Somewhere else, lawns need to be manicured, cars need to be washed, and hills need to be skied. With a martini in one hand and a speeding ticket in the other, he left us in a cloud of dust for his next project.\r\nIt's a sad day indeed that such a special person is no longer with those that he gave unending love, affection and kindness to.\r\nWhen Blaine met Kaye Gertino at South High, she quickly became his high school sweetheart and love of his life. They married November 17, 1945. Their love and passion for each other never wavered in the 73 years that they were together. Shouldn't we all be so lucky.\r\nAfter serving in the Merchant Marines in W.W.II, "Beanie" began a 40 year long lustrous career with Western Electric. In the early 1950's, because of his expertise and dedication, he was asked to work on the "DEW" line above the arctic circle, a project that helped keep America and our way of life safe during the cold war years. Through the course of his career, his job took him from the hustle and bustle of the streets of New York to the "City by the Bay" and many other critical communication sites throughout the country. An important stage in his career was an 18 year assignment in Michigan, where he kicked butt, took names and showed people what a real work ethic was all about. \r\nWhile in Michigan, he caught the running bug (go figure). He successfully completed the Detroit, Toronto, Baltimore, New York, and Boston Marathons. He took first place in a 10k race in Salt Lake for his age group.\r\nUpon retiring, Blaine and Kaye moved back to Utah where they bought a home in Bountiful. When he wasn't creating the "Terraced Gardens of the Andes" in his back yard, he was doing the Blaine Hill "Looney Pruney Construction" basement remodel. It actually turned out very nice and was party central for many Hill family parties. To date, there have been no electrical fires or major plumbing back ups. His left thumb never forgave him. \r\nBear Lake was where he spent his summers enjoying the water, sun and most importantly family. Martinis were shaken at promptly 8 p.m. and rare steak followed exactly 7 ½ minutes later. Cruises and long vacations in Mexico kept him and Kaye, his life long sweetheart, busy enough that he wasn't looking for something to do.\r\nHis dry and witty sense of humor kept people on their toes, his great, from the heart, smile kept those he loved happy and his occasional impromptu use of his middle finger kept the kids in the back seat giggling.\r\nHis greatest accomplishment was his marriage to Kaye, his greatest sorrow was the loss of his son Paul and everything else in between was pretty damn good. \r\nUno, Dos, Tres, Bean!\r\nPreceded in death by his parents William R. and Zora Manwaring Hill, brothers Clyde and Harold, sister Karma and son Paul. Survived by his loving wife Kaye, daughter Lynda Parrish (Jack) and son Michael (Barb), 5 grandchildren, 10 great grandchildren and sister Anna Jane.\r\nA celebration of his wonderful life will be held 6:00 p.m. Friday June 29 at Neil O'Donnell & Sons Mortuary, 372 East 100 South, Salt Lake City. A graveside service will be 1:00 p.m. Saturday, June 30, at Memorial Holladay Cemetery, 4900 S. Memory Lane, Holladay, Utah with a viewing from 12:00 - 12:30 p.m., also at the mortuary.\r\nHe will be laid to rest next to his beloved son Paul. \r\n

The family of William Blaine Hill created this Life Tributes page to make it easy to share your memories.

Send flowers to the Hill family.