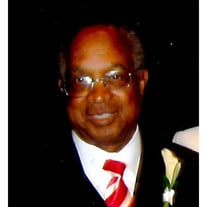 William LaVon Price, Sr \"Willie\" Community activist and legendary champion for youth, Willie Price, passed peacefully from this earth on November 15, 2017 due to complications from dementia. Willie was born January 27, 1929 in Mohrland, UT to David and Ethel Hall Price. After losing his father at the age of 4, Willie, his mother and five siblings relocated to SLC's westside where he resided for most of his life. He attended West High School, became a professional boxer at the age of 17 and then engaged in a 38-year career with the Federal Government as an EEO Officer at Hill Air Force Base and with the BLM.\r\n\r\nWillie devoted much of his 88 years in service to his family, his church, his career and to the community at large, especially the underserved and underrepresented youth of his beloved westside. Although small in stature, Willie's accomplishments were larger-than-life. He was instrumental in initiating the Central City Community Action Program, Neighborhood Housing Program, the Parish Athletic Recreation Association, and numerous other athletic and community-based outreach programs. Among his many acknowledgements, Willie was awarded the NCCJ Man of the Year award by Governor Calvin L. Rampton, received the NAACP award for Civil and Human Rights, and was appointed to serve on the Black Advisory Council by Governor Jon M. Huntsman.\r\n\r\nWillie married his high school sweetheart, Frankie Rawlins, April 8, 1948. Together, they raised nine children and welcomed a legacy of offspring in their 69 years of marriage. The Price home was a gathering place for both family and friends, and Willie never wavered in lending a hand to anyone in need. He was a consummate supporter of his children, grandchildren, and greatgrandchildren, rarely missing an opportunity to cheer them on at sporting events or performances.\r\n\r\nWillie is preceded in death by his parents, sister Mildred, brothers Lamoine, Orville, and David, sons Frank and Victor, and grandsons Jeremy and Jason. He will be truly missed by his sister Laverne, wife Frankie, sons Bill (Joann), Kevin (Cory), Joey (Kathy), daughters Robin (Dennis), Valerie (Michael), Elizabeth and Barbara Ann, grandchildren, greatgrandchildren, great-great grandchildren, and numerous extended family members and friends.\r\n\r\nThe family would like to extend their special thanks to Willie's caregivers at Rocky Mountain Care Center and to Heather from Hospice.\r\n\r\nA mass of Christian burial will be held at noon on Tuesday, November 21, 2017 at St. Patrick's Church, 1058 West 400 South, SLC, UT with visitation and rosary one hour prior to services at 11:00 a.m. A Celebration of Life will be held Monday evening from 6 - 8:30 p.m. in the St. Patrick's Parish Hall. In lieu of flowers, please make donations to the Sorenson Multi-Cultural Center, 855 W California Ave, SLC, UT 84104 in memory of Willie.\r\n\r\n

The family of William LaVon Price, created this Life Tributes page to make it easy to share your memories.

Send flowers to the Price, family.